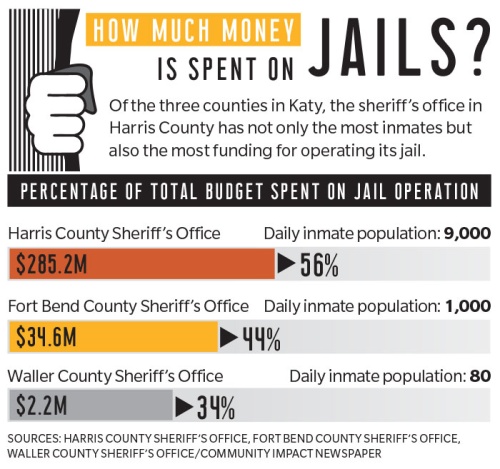 In 2018, mental health professionals at the Harris County jail had nearly 190,000 contacts with individuals with mental illnesses and prescribed psychotropic medication to nearly 30,000 patients, said Frank Webb, the manager of Harris County’s Bureau of Mental Health and Jail Diversion.

“It is a huge problem,” he said. “Jails and prisons have become the new mental asylums of the 21st century. … [And] treating people with serious mental illness in jails is very expensive.”

To help  people with mental illnesses find treatment among community programs rather than in jails, local law enforcement officials, county commissioners and legislators are working in the 86th legislative session for additional jail diversion programs.

“It’s better to try to get these individuals help for their mental illnesses [or] psychosocial problems, rather than  [having them] incarcerated in jail, which is really not the place to treat mental illnesses,” Webb said.

State Sen. Joan Huffman, R-Houston, filed Senate Bill 362 on Jan. 16. It would allow criminal courts to issue outpatient treatment for inmates with a mental illness and pose no risk to others and comply with court-ordered treatment, said Amanda Jones, the director of governmental relations for The Harris Center for Mental Health and Intellectual or Developmental Disability, which is the county’s mental health authority.

As of March 24, the bill is in the State Affairs Committee.

The pilot has since expanded to become a permanent program with pre-booking, post-booking and post-release services to divert those with mental illnesses from jail, said Wayne Young, the CEO of The Harris Center.

Fort Bend County Precinct 4 Commissioner Ken DeMerchant, who supports the legislation, said he feels local residents need more access to treatments and programs that reduce the frequency of arrests and incarceration among people with mental illnesses in the county.

“It’s a subject that really needs a lot of attention from the Legislature,” Cook said. “The Legislature, in my opinion, does a lot of talking, but there’s not a lot acting. They give us all of these unfunded mandates to do with mental health, and we don’t have the funding.”

County jails in the Katy area continue to be among the biggest mental health care providers, local law enforcement said. But they and others  are looking for better ways to divert more people with mental illness from incarceration.

“Once they hit our jail, it makes things a lot more complicated,” Soland said.

He, Webb and Cook explained that inmates with a severe mental illness often need time at a state hospital to become competent enough to stand trial. Competency restoration is a process that can take three to 13 months for a spot to open up at these hospitals.  During that time, the inmates stay in  jail, costing the county millions,  they said.

“What we’re trying to do is divert [nonviolent persons with mental illnesses] from ever being booked into jail,” Webb said.

Harris County opened the Judge Ed Emmett Mental Health Diversion Center in October. Here, officers can take persons with mental illness who have been picked up for low-level, nonviolent offenses to get treatment, Webb and Young said.

In its first five months, the Emmett Center served 562 people, Young said. These people—had they not been checked in the center—would have gone to jail.

Last year, Harris County officers arrested about 2,000 people who had a mental illness for trespassing, he said.

The city of Katy started its own CIT in mid-2018, said officer Mark Garsee, the program’s coordinator. Since May, Garsee said he and two other officers have been called to work on about 26 cases, of which they helped 21 individuals with mental illnesses go to a hospital for evaluation to receive the right resources for help, he said. Two years ago, the department had about 28 calls involving someone with a mental illness, and only one individual was taken to a hospital for evaluation.

“We’re trained to recognize [mental  illness] now, and we know how to deal with it,” Garsee said.

Cook said there are no programs or community organizations in place in Waller County to help divert people with mental illness from coming to the jail, though the Texana Center provides services for inmates needing treatment for mental illnesses. He explained smaller counties such as Waller are far away from major cities. The distance creates logistical problems, and there are fewer resources.

Additionally, Waller County—like all counties in the state—has put new policies and technology in place to comply with The Sandra Bland Act, named after an inmate who died by suicide in the Waller County Jail in 2015, Cook said. Gov. Greg Abbott signed the act in 2017 requiring police agencies to make a good-faith effort to divert people from the criminal justice system.

After Bland’s death, Cook said the county revamped its mental health policy and quadrupled the requirement for mental illness training. The county is also constructing a new $40 million jail that will double the jail’s capacity to about 200 inmates.

“We do the best we can with the resources we have available to us,” Cook said. “Mental health is a big concern. It’s not something that any of us take lightly because it’s an impact on everybody. An impact on the community, an impact on the county, on the sheriff’s office in the jail.”