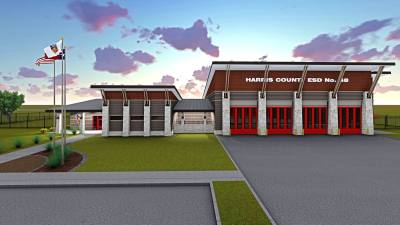 Correction: This story has been updated to state that the fire station will be at the southwest corner of I-10 and the Grand Parkway, not the southeast corner.

Construction will soon begin on a new fire station in the southwest corner of I-10 and the Grand Parkway.

Harris County Emergency Services District 48 is hosting a groundbreaking ceremony for Fire Station No. 1 at 4:30 p.m. March 28 at 24127 Western Centre Drive, Katy, according to a press release.

When complete in summer 2020, the roughly 18,500-square-foot fire station will house seven emergency vehicles within four apparatus bays, according to the release and an interview with Lt. Simon Vandyk, HCESD 48's public information officer. Eighteen fire staff, emergency medical services staff and chief officers will work at the facility, per the release.

The existing temporary fire station—which consists of several trailers—is located at 23520 Kingsland Blvd., Katy, Vandyk said. It houses about six to eight fire and EMS staff members, one fire engine and one ambulance. Crews have operated at this location for about three years.

A new temporary, manufactured fire station will be placed at the Western Centre Drive over the next couple of months once paving for the parking lot is complete, Vandyk said.

“This new facility will allow our crews to operate from a better location with quick access to both highways which will enhance our response times to both our residents and businesses in the surrounding area,” Fire Chief Jeff Hevey said in the release.

Martinez Architects is the designer of the new station, which includes features to help prevent firefighter cancer, per the release. For example, to prevent vehicle exhaust fumes from contaminating common and sleeping areas, exhaust capture devices will be installed in the apparatus bays to divert the fumes.