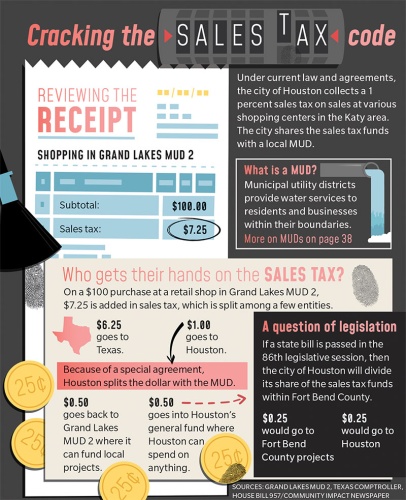 Editor’s note: This is the second article of a multipart series about legislation related to unincorporated areas in the Greater Houston area.

Editor's note: This story was updated to clarify that if House Bill 957 becomes law, the city of Houston would directly spend part of its share of sales tax funds from strategic partnership agreements on agreed upon projects within Fort Bend County. It would not send the funds directly to the county.

Over the past decade, the city of Houston has pocketed about $118.9 million from sales tax in the Katy area—but that could change if a state bill this legislative session becomes law.

House Bill 957 would require Houston to share part of its portion of the sales tax collected in unincorporated Fort Bend County directly with the county, said Fort Bend Precinct 3 Commissioner Andy Meyers, the impetus behind the bill.  As of March 21, the bill is in the House Land and Resource Management Committee.

The city of Houston collects and shares sales tax in areas outside its city limits through strategic partnership agreements with municipal utility districts. The MUDs spend their share on local projects, but Houston invests its stake inside city limits and not within its extraterritorial jurisdiction, where MUDs and millions of people reside, said residents, county officials and local state legislators.

“All we’re after is to have the city of Houston say some money will stay in Fort Bend County,” said Rep. Rick Miller, R-Sugar Land, one of the co-authors of the bill. “Resources are scarce, and [Houston] needs those monies, but those monies are not benefiting where that money came from because [the area is] in the ETJ.”


How a SPA works

In the ETJ—a band of unincorporated land surrounding a city’s limits which the city can eventually annex—Houston regulates development but is not required to provide services, per state law. A MUD, on the other hand, is a political entity that levies a property tax and other fees and can provide water, wastewater and drainage services to those within the ETJ.

A SPA allows a city to conduct a limited purpose annexation on commercial areas in a MUD in exchange for sharing the sales tax. Residents in the ETJ cannot vote for city of Houston council members—unless they live in the commercial area annexed by Houston in the SPA.

SPAs are initiated by a MUD, said Margaret Wallace Brown, Houston’s interim director of the planning and development department. Generally, the city levies a 1 percent sales tax and splits the total proceeds 50-50 with a MUD. The tax is only established in areas with an available cent of sales tax revenue.

Fort Bend MUD 50 President Craig Lewis said in an email there were two reasons why the MUD, which is located near the intersection of Grand Parkway and the Westpark Tollway,  decided to enter into a SPA agreement in 2005.

“First, to provide an agreement not to annex the MUD for 30 years, and second, to have an additional source of funding to build MUD infrastructure and projects,” he said.

Fort Bend MUD 50 has used its share of SPA funds—about $6.9 million over 10 years, per Houston records—to build trails and a park, Lewis said. Thanks to the sales tax monies, the MUD does not have to use its property tax collections or raise its property tax rate to build these facilities, he added.

Located just north of the Westpark Tollway and Grand Parkway intersection, Grand Lakes MUD 2 used its share of SPA funds, about $9.5 million since 2009, to pay for new playgrounds,  trails, benches, and additional patrol deputies, board members said. The sales tax has also allowed the MUD to lower its property tax rate $0.14 over five years and pay back its debt quicker.

Although the MUDs use their SPA money for local projects, the city of Houston has not, officials and residents said.

Brown said the city puts its share of the SPA funds into its general fund to finance day-to-day activities.

“The city of Houston generally does not spend money outside of our city limits,” she said.

However, Schauer noted although Houston may not directly spend the SPA revenues within MUD communities, the funds may provide an overall economic benefit to the region.

“The logic that I always hear was that the city is where all the activity is, and everyone needs Houston to be healthy for the region to be healthy,” Schauer said.

“While it is apparent that the funds raised from this SPA or others within the Houston ETJ are largely directed toward Houston, local residents do benefit from road and other improvements that they do, since many in this area work in the Houston metro area,” Cleland and others said in the letters.

But HB 957 could change all that in Fort Bend County. If it passes, Houston would have to spend half of its share—or 25 percent of the total collection—of SPA funds in the county.

Not everyone supports the idea. It did not pass as priority legislation for the county, and Meyers has unsuccessfully tried to pass versions of this bill in the past two legislative sessions.

Some MUDs and residents are worried HB 957 will modify the SPA agreement so the MUD will no longer receive as much sales tax funds from the city of Houston, which declined to comment about the bill.

“If these funds are given to [Fort] Bend [County], then [Cinco MUD 12] will have no control over the funds being used in the area for the community that has actually contributed to the account,” wrote Cinco MUD 12 President Stephanie Faulk in a Jan. 28 letter to the Fort Bend County Commissioners court.

Meyers said in an email according to Texas Legislative Counsel, the bill will not have an effect on existing SPAs between MUDs and Houston. MUDs will continue to receive their sales tax share.

Chris Skinner, an attorney for Schwartz, Page & Harding LLP, which represents Grand Lakes MUDs 1, 2 and 4, said at February board meetings he sees how this bill would benefit MUDs through additional money for local public projects, but he is concerned how the bill would be enforced.

Meyers said the county and city would discuss and agree upon projects or services the money would go toward, and Houston would report the amount of sales tax collected and spend the required amount of funds on public projects within Fort Bend County.

As of March 21, SB 1300 and SB 1301 were in the Senate Intergovernmental Relations Committee.

Although Radack is not involved in any bills related to SPAs and Harris County SPAs are not included in HB 957, he said he hopes the contracts are abolished.

“I do not think it should even be legal to have limited annexation [to create the SPA,]” he said. “I’d love to see the legislature repeal them, but I don’t think that will occur.”

Meyers said he tried to prevent MUDs and the city of Houston from establishing SPAs through legislation but was unsuccessful. But that has not stopped him from trying to obtain additional sales tax money in his precinct.

“I think [SPAs are] unfair to my constituents,” he said at the Jan. 28 commissioners meeting. “And I want to make certain they are treated fairly.”