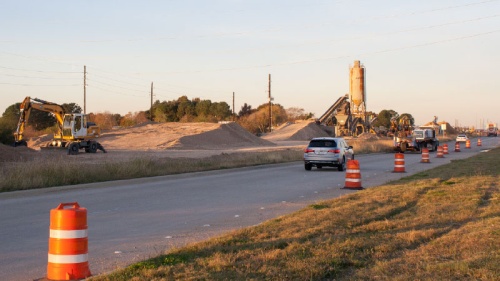 Sales tax funds collected by Fort Bend County have funded or will fund various public projects in the Katy and Fulshear areas.

Editor’s note: This is the first article of a multipart series about legislation related to unincorporated areas in the Greater Houston area.

Precinct 3 Commissioner Andy Meyers, who represents portions of the Katy area and Fulshear, is working on state bills that would give the county additional tools with sales tax to pursue public projects in unincorporated areas of Fort Bend County.

About 88 percent of Precinct 3’s residents live in unincorporated areas, or land outside city limits in which counties must provide services, such as public safety, law enforcement and infrastructure, he said.

“FM 1093 would not have been built except for the fact that I created the county assistance district,” Meyers said.

But there are limitations to how counties can collect and spend these tax dollars, and Meyers said he aims to loosen the CAD restraints.

CADs were born out of the 76th legislative session in 1999, according to state law. Fort Bend created its first CADs in 2011, according to county records.

Fort Bend County has 11 of these districts, which have collected $36.6 million in the past seven years, per county records. CADs levy a 0.125-2 percent sales tax within their boundaries.

In addition to the Westpark Tollway/FM 1093 expansion, funds collected from the four Katy-area CADs have helped pay for 20 solar-powered speed signs and additional staff and vehicles for law enforcement, Meyers’ office said.

Meyers said the county pursued CADs after unsuccessfully preventing the city of Houston from collecting its own sales tax in unincorporated Fort Bend County via strategic partnership agreements.

“I don’t want [sales tax revenue in Fort Bend County] to go to the city of Houston or developers,” he said. “Sales tax is a general tax paid by the public and should be used to pay for government services, and that is simply not happening.”

Per state law, the maximum sales tax that can be levied is 8.25 percent. A flat 6.25 percent sales tax goes to the state, while local taxing jurisdictions—cities, counties, transit authorities and special districts—can divvy up the remaining 2 percent among themselves.

A SPA allows Houston to collect up to 2 percent of the local sales tax by annexing commercial property within a municipal utility district, according to officials and documents. Houston must split the sales tax revenue with the MUD, which spends its share of the funds on projects that benefit its residents, such as water and drainage. But Houston is not required to spend its share of the money within the MUD.

Cinco Residential Property Association President Tim Schauer said to his knowledge, the city has not spent any of the money collected from the SPA agreement within Cinco MUD 12, which covers LaCenterra at Cinco Ranch.

Houston City Council Member Steve Le who represents District F, which includes the tracts of the limited annexed areas in Fort Bend County, had no comment regarding how the city uses its share of the SPA funds.

Although CADs have helped finance several projects in the Katy area, these districts have many restrictions.

Texas law states that CADs can only be created if approved by a majority of voters, but there is no legal way to dissolve a CAD. Also, cities such as Houston can object to the creation of a CAD within their jurisdiction, but a county cannot object to the creation of a SPA. Meanwhile, revenues collected by CADs can only finance five types of projects within its boundaries: roads, law enforcement, recreation facilities, public health, or tourism and economic development initiatives.

With the help of local legislators, Meyers is hoping to lessen some of these restrictions.

Rep. Ron Reynolds, D-Missouri City, and Sen. Borris Miles, D-Houston, have filed bills that would allow CADs to expand their boundaries to include the right of way on roads and county-owned property even if the total sales tax rate would exceed the state cap. CADs would not collect sales tax in these areas exceeding the cap but would allow more options to spend CAD funds, Meyers said.

The state House of Representatives and Senate passed this bill in the 2017 legislative session, but it was vetoed by Gov. Greg Abbott.

“He didn’t understand the bill,” Miles said. “His legal counsel thought it was unconstitutional, but they have been educated.”

Another bill that has been filed by Rep. Phil Stephenson, R-Wharton, proposes removing a city’s ability to object to the creation of a CAD within its jurisdiction. Meyers’ and Stephenson’s offices are working to change the language of the bill so it would guarantee if a city fully annexed an area of the CAD, the CAD would remove itself from the area to allow the city collect the sales tax revenue.

Rep. Rick Miller, R-Sugar Land, filed a bill to allow CADs to spend tax revenues on public projects outside their boundaries, granted the project is approved by the commissioners court and directly benefits the CAD.

“I try to support [Meyers’] legislation that makes sense and really benefits the constituents and the rest in Fort Bend County,” Miller said. “That’s why I’m here, that’s my purpose.”


Future Use of Fort Bend CADs

Fort Bend County is one of just seven counties that have created CADs, and it is the only county in the Greater Houston area with at least one CAD, according to the state comptroller.

When asked why Harris County had not established one of these districts, Precinct 3 Commissioner Steve Radack said he was unaware of their existence.

Meyers said he has no plans to pursue additional CADs, but at least 7 CADs will be on the May ballot in other Fort Bend County precincts, per county documents. These bills will help the county obtain additional tools and funds to provide services to residents. Other counties that have CADs or plan to create such districts will also benefit.

In the future, Meyers said he plans to use CAD funds to improve roads and fund a motorist assistance program, which will help drivers facing roadside emergencies, including a flat tire or dead battery. Meyers said he hopes to expand the program countywide.

Prestage voiced his support for Meyers’ long-term work to expand the powers of CADs. He said since CADs were added to local government code, Meyers has worked with state legislators every session to tweak the law and gain more flexibility with CADs.

“Meyers has single-handedly championed this cause,” he said.  “Fort Bend is really the only county doing this in a big way. … It is a great program to create new funds for projects.”