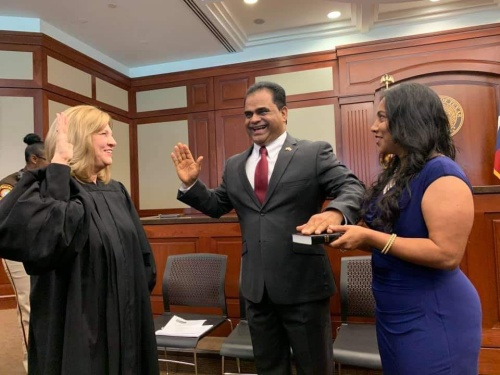 KP George was sworn in as Fort Bend County Judge on Jan. 1.

Democrat KP George was officially sworn in as Fort Bend County Judge on Jan. 1 along with other newly elected officials, according to a Dec. 31 news release. George is the first South Asian elected as the top executive of a county in Texas, the release stated, and he will oversee the county’s nearly 3,000 employees, $373.5 million budget and for the county’s 770,000 residents.

George defeated Republican incumbent Robert Herbert—who had held the position since 2003—in the 2018 midterm election by 14,782 votes. Herbert officially vacated his seat on Dec. 26 to give George an opportunity to set up his office.

In a Dec. 28 news release, George announced that he appointed Fort Bend County Fire Marshal Mark Flathouse as the interim emergency management coordinator at the Fort Bend County Office of Emergency Management. Jeff Braun had been the emergency management coordinator since 2003, according to his biography on the University of Houston’s website, where he is an adjunct instructor.

Flathouse, who took office Jan. 2, has over 20 years of experience in public service, and he has served as the fire marshal for Fort Bend County since 2013, according to the Dec. 28 release. In his first 100 days, Flathouse plans to analyze the department and create a strategic outlook for the future, according to the release.

Additionally, newly elected District Attorney Brian Middleton has also begun making changes in his department. Democrat Middleton was sworn in on Jan. 1, having defeated Republican candidate Cliff Vacek in the 2018 midterms after Republican incumbent John Healey announced he would retire from the position.

According to a Dec. 28 statement, Middleton required all employees in the district attorney's office to reapply for their positions, and he dismissed those that he would not retain on Dec. 28. New employees will be hired in the following days, according to the statement.

“The transition will be ongoing with several phases,” Middleton said in the statement. “Staff changes will be inevitable and needed to achieve the goals I laid out in my campaign for district attorney—policy changes, community-based transition committees, and new staff will all be part of reforming the criminal justice system in Fort Bend County.”

Community Impact Newspaper has reached out for more information regarding how many employees were dismissed and how many will be hired, but a representative for Middleton was not immediately available.

Meanwhile, Democrat Ken DeMerchant was sworn in on Jan. 1 as the new Fort Bend County commissioner for Precinct 4. He defeated Republican incumbent James Patterson in the 2018 midterm election.
SHARE THIS STORY