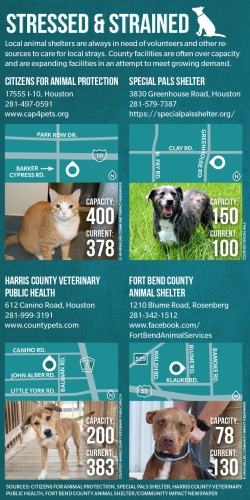 “I could go on and on about strays, lost dogs, found dogs, intake requests, the reasons why we have such an issue and the reasons why most dogs get lost [or] go astray,” Special Pals Shelter Director Elizabeth Trick said. “It’s a multilevel issue and awareness is part of the solution.”

According to data provided by the nonprofit Special Pals Shelter, the number of cats and dogs taken in has increased 211 percent since 2010.

“We have 39 kennels that we have in the shelter that are supposed to give the dogs access inside and out, but right now we’re using both sides,” said Barbara Vass, adoption coordinator for Fort Bend Animal Services.

Vass said intakes for dogs and cats throughout Fort Bend County has been between 3,500 and 4,000 annually for the last few years, but she expects that number to grow as the county’s population grows, especially near Katy.

Vass said Fort Bend County is adding a $1 million expansion to its Rosenberg facility, which serves the whole county, including the Katy area.

Harris County is also building a new facility, White said. Petco recently donated funding for a new facility with 243 dog runs or cages, which can support about 315 dogs. It will also hold about 210 cats and space for administration, veterinary care, animal isolation and nursing, White said.

Citizens for Animal Protection expanded in 2017 by adding a new veterinary clinic building, said Maverick Wagner, Clinic and Foster Care Director. The nonprofit shelter takes in between 8,700 and 10,500 animals each year. Wagner said the number fluctuates with the economy. This year, CAP has received about 6,000 animals, Wagner said.

Sources said proactive community members help make their workloads manageable. Volunteering at shelters can be a big help, they said.

“In the city of Katy, all dogs and cats over 6 months have to be registered with animal control. This helps get them back to their homes,” Brown said.

Special Pals Shelter is a no-kill shelter, according to its website. CAP is a limited intake facility that does not take in more animals than it can hold, Wagner said. Meanwhile, county facilities take as many pets as they are able to and can become overwhelmed by animal intakes, officials said.

Wagner said helping animals stay in their current homes helps as well. Most area shelters offer low-cost veterinary care. Wagner said the low-cost clinic at CAP may cost a quarter of what commercial veterinary care does, making it affordable to keep pets.

Agencies rely on social media to spread the word about animals available for adoption. Vass said area residents can help by following the shelters and sharing pet profiles on social media.

“We want to give them every available chance to find a home, but we always have to rely on our community for support, and every time we’ve reached out to them for help … people respond in droves,” Vass said.