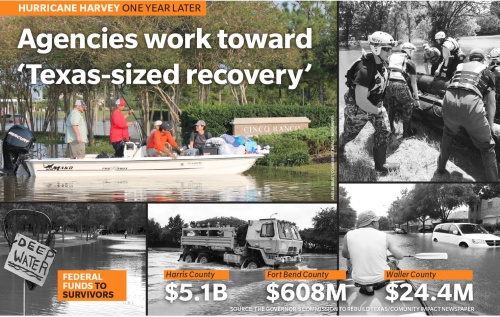 One year after Hurricane Harvey, government officials are appropriating funds for regional flood mitigation and analyzing lessons learned during the storm to improve responses to future events and keep residents safe.

“We’re all a region and we’ve got to help where we can, and I wouldn’t hesitate to ask another county for help if I thought they had something that I might need during an emergency,”  Hebert said.

Cellphones were used to communicate between command centers, field personnel and the military, which could have proved disastrous if cellphone towers had been damaged, VanDyk said.

A task force is working to improve communication through implementing a Katy-area command center, he said. The Katy Area Economic Development Council, Harris and Fort Bend counties as well as state officials are involved.

“Basically, [the command center would entail] a localized operation center, where you can have people operating on the ground still reporting from the scene to the [office of emergency management] but managing that situation using regional assets,” VanDyk said.

Discussions about a regional office are just beginning, he said.

“It’s easier to get ready for an event than to be surprised by an event and have to be reactionary,” ESD 48 Fire Chief Jeff Hevey said.

Katy Fire Department will use Station No. 2 near Katy Mills because the Avenue D station flooded during Harvey, KFD Chief Russell Wilson said.

County and city authorities are concerned about disaster preparedness as well. Federal and state officials are working to get reimbursements to local municipalities for emergency operations related to Harvey.

“Because of our track record implementing the long-term housing recovery programs and the sheer size of the area affected by Hurricane Harvey, the GLO was tapped to help implement a Texas-sized recovery,” Eck said.

Fort Bend County spent $13 million on debris removal alone and has only received $5.9 million in federal reimbursements it is due, Hebert said.

“If we had another, [Harvey-like] event this hurricane season we would have the funding available to do everything we needed to do,” Hebert said.

“If we have a Harvey-level type event this year, I think we’re going to face significant challenges not only on the county side–this entire region is strapped,” Sanchez said.

Fulshear is mostly recovered from Harvey because it was not hit as hard as its neighbors, Mayor Aaron Groff said.

Katy voters passed $14.25 million in bonds in May for flood mitigation with 88 percent of voters for the bonds.

Byron Hebert said Katy is in good shape because it has to keep half of its budget in reserves, but eventually funds would run out if additional disasters continue annually. The city’s reserve balance is $18 million, with about $13 million reserved for emergencies.

“[The Army Corps of Engineers has] to do a study,” McCaul said.

McCaul said he worked to amend the Water Resources Development Act to provide $12.1 billion to evaluate drainage throughout Greater Houston and expand the Corps’ use of private contractors.

Edmond Russo Jr., deputy district engineer with the Army Corps of Engineers Galveston District, said the Corps will study watersheds in Greater Houston, looking at them as a system. The results will determine projects the Corps would pursue, including a third reservoir north of Katy.

“We would anticipate that it wouldn’t be a silver bullet for the region,” Russo said.

Russo said a third reservoir would help areas very near to it, not all of Greater Houston.

Funding may come with a $2.5 billion Harris County bond that voters will decide Aug. 25. Results of the referendum could not be reported as of press time.

Robert Hebert said Fort Bend County is doing a $3 million watershed study to identify the most promising flood mitigation projects. After the study, a bond package of between $360 million and $375 million will be put to Fort Bend County voters.

“We think the watershed study will change that [dollar] number because it will prioritize those needs and tell us which of those projects would have true economic benefit and which wouldn’t,” Robert Hebert said.

Sanchez said his main concern is getting residents and neighboring counties to understand that drainage in Harris and the surrounding counties affect one another.

“That’s something that could negatively impact us in the future, so my hope is that communities around us, the residents would be mindful of that and really push for every community in our area to really make use of a regional approach of how we deal with flood management,” Sanchez said.