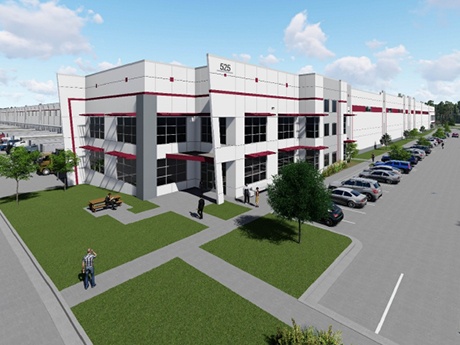 One of the most recent industrial projects to come to Katy includes the Oakmont distribution warehouse, which is set to complete construction at the end of July.

Over the last five years, industrial development has significantly ramped up in the Katy area, according to city officials. Officials said the influx of new industrial developments will help the city keep its tax rate steady in light of the $19.5 million bond that voters approved in May for flooding and drainage improvements throughout the city.

“The city is really gearing up towards the industrial side,” city of Katy Administrator Byron Hebert said. “It’s ramping up.”

Katy’s industrial area includes the western corridor between the Grand Parkway and I-10, Hebert said. This area encompasses Katy’s West Ten Business Park, which has seen a significant amount of activity, especially the last few months, he said.

Hebert said large-scale warehouse distribution centers like the Amazon facility that recently opened this year are a main driver of industrial development in Katy.

“Not only do we have the large distribution centers, but a lot of big companies are moving their corporate headquarters here, their corporate offices—like Bel Furniture, like Pepperl+Fuchs,” said Kayce Reina, Katy’s director of tourism, marketing and public relations.

Hebert said the recent developments that have taken root in the city and what is to come is not by accident. The city has been proactive in planning for heavy industrial projects by choosing to extend its city limits about 4 miles west past the business park almost to Woods Road.  In spring 2018 the city also put water and sewer lines in place as an incentive for companies to develop there.

“We really have a lot of activity because you now have utilities,” Hebert said. “The city is in a great position to kind of dictate its future of what we want to see come to us.”

Hebert said now that infrastructure is in place and the city has extended its city limits, industrial development could continue to take off in the next few years. While Katy’s West Ten Business Park is nearly built out, he and Reina said the 4 miles that extend from the park could potentially be developed into three more industrial parks.

“The whole area between West Ten Business Park and Woods Road—now that it has utilities—will develop,” Hebert said. “And we have interest on almost every single piece of property that’s out there,”

Industrial development in Katy can be defined as large-scale distribution warehouses, such as the Bel Furniture development and other projects like the new Oakmont facility that is set to finish construction by the end of July, and also global headquarters relocations.

These types of developments bring in various benefits to residents; namely they generate revenue that helps offset taxes.

The city has lowered its tax rate for the last five years, but Hebert said it will not be lowered again considering the city still has to pay off a $19.5 million bond package for drainage improvements that voters approved in May.

Reina added that while other cities have raised their tax rates to pay for drainage improvements, Katy has not raised its tax rate to pay for any drainage-related projects.

“And that industrial and heavy commercial development helps us do that,” Reina said. “It does help us keep things steady for our residents and businesses.”

Hebert and Reina said they could not share any projections of revenue that the newer developments like Amazon will bring in yet since the county appraisal district has not received final numbers from tax rolls, but both expect the return on investment to be significant.

“Our projections are that they will have a substantial impact with revenue coming into the city,” Hebert said.

There are several factors as to why industrial development is increasing in the Katy area. Aside from the city’s proactive approach, the 4-mile stretch of land that has the most potential for development is zoned to heavy industrial commercial, making it easier for companies to build there.

“Zoning does provide a level of protection for companies that are looking to enhance or maximize their value,” said Lance LaCour, president of the Katy Economic Development Council.

Transwestern Development Company has three buildings in West Ten Business Park. Three years ago, the company purchased 75 acres in the park for “spec” space, meaning no signed tenants or preleases.

Now the company has developed two buildings, both leased to Bel Furniture: a roughly 340,000-square-foot building that serves as a warehouse and corporate headquarters and a nearly 75,000-square-foot air-conditioned showroom.

Brian Gammill, a broker for Transwestern Development Company, said Transwestern is continuing to develop the property it has in the park and has plans for Phases 2 and 3, which entail a 248,000-square-foot building that can accommodate four tenants that Transwestern expects to complete construction on by the end of 2018.

“We have an additional 30 acres adjacent to Phase 2, which we are talking to a couple of tenants on for a prelease or a build to suit, but we are seeing good action on it,” Gammill said.

The Oakmont facility is another big project that will maximize the park’s industrial pull. Tom Cobb, senior vice president of development for Oakmont Industrial Group, said the development was made possible thanks to a two-year, 100 percent property tax abatement agreement between Waller County, the city and Oakmont.

“Our project is probably the highest quality industrial development that has gone into the whole Houston marketplace from an industrial standpoint,” Cobb said.

Cobb said the Oakmont facility will feature LED warehouse lighting, high ceilings to store more product, and the company has plans in place to accommodate an oversized auto parking requirement for E-commerce use.

“A lot of the functional attributes that we are providing is really suited well for that type of E-commerce play,” Cobb said. “And [being located on] the west side of town, you can distribute to Austin, San Antonio and Houston.”

“You have essentially what 250,000 people that live within 5 or 6 miles of [the Grand Parkway] and I-10 and so these users—i.e. Amazon at a million feet ... and Bel Furniture at 400,000 feet—they want to be close to the consumer, and that’s what is driving a lot of the growth out there.”

LaCour said aside from the area of 4 miles that extend west of the city, more industrial development will occur north of the Grand Parkway.

“I think you are going to see more corporate, more campus-style development going that direction and maybe a greater mix of opportunities,” he said. “This is going to be a good year for us.”
SHARE THIS STORY