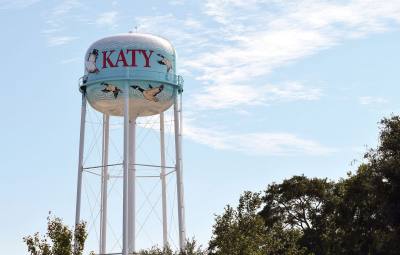 Evidence of Katy’s latest efforts to upgrade its water facilities can be seen in the bright blue mural on the water tower near I-10 and Katy Fort Bend Road.

The tower, as well as one located near the Katy Police Department facility on Franz Road, was repainted in October and November with Canadian geese to reflect the city’s heritage, City Administrator Byron Hebert said.

The water tower is located in Katy Management District No. 1, which is responsible for its own water, wastewater and drainage. The district will repay the city of Katy for the $318,790 work on the tower near the mall.

“We’ve already paid for it; I want to get that money back,” Katy Finance Director Becky Wilkins said.

Radio equipment used by city emergency services was removed from the towers and reinstalled after painting.

“The equipment was removed from the towers for the painting process, and during this time it was decided that we should assess all towers for usable equipment as well as those items that are end of life,” KPD Information Technology Specialist Michele Miller said.

She added that the water towers have more improvements scheduled, which are currently out for bid.

Katy Mayor Chuck Brawner said the city is also considering adding a second well for the water treatment plant on Cane Island Parkway. The plant sends water out to the west of town, almost to Wilke’s Road, and will service the upcoming Amazon distribution center and other nearby homes and businesses once they are built.

“There’s one well there now, but we’ll be putting in a second well to support that, so if one goes down, we can still get water out,” Brawner said.

The city is assessing what other water infrastructure may need repairs or upgrades, such as Water Plant No. 4 at 6850 Franz Road, Public Works Director Elaine Lutringer said.
SHARE THIS STORY