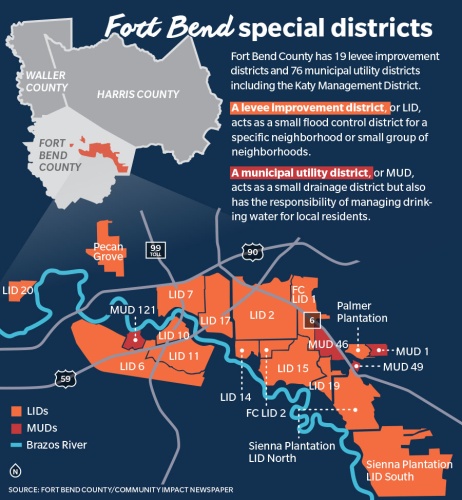 As Fort Bend, Harris and Waller counties continue to recover from flooding brought about by Tropical Storm Harvey, their respective governing bodies are weighing options to mitigate flooding and meet modern drainage standards.

Fort Bend County officials are considering the creation of a flood control district, but that idea is in its infancy, according to the office of County Judge Robert Hebert. The county has a drainage district and 19 levee improvement districts, commonly referred to as LIDs, according to the county engineer’s website.

It also has several cities that handle their own water management as well as municipal utility districts, or MUDs, which help manage and improve drainage.

In contrast, the Harris County Flood Control District has an operating budget of $120 million, half of which is used for maintaining existing infrastructure and operations, with the other half going to improvements and new flood control infrastructure, said Karen Hastings, Harris County Flood Control District project communications manager. HCFCD’s budget for fiscal year 2017-18 includes $1 million for home buyouts to allow residents affected by flooding to move away from flood plains and $2.1 million for improvements to Berry Bayou near Pasadena.

Drainage district staffers are stretched thin as well, after dealing with two significant floods in as many years. The 2016 Tax Day Floods damaged about 22 miles of Willow Fork Bayou, causing erosion and bank sloughing—soil falling in clumps— Vogler said. The county was still working on that when Harvey hit.

Fort Bend County is capable of adding drainage measures, Vogler said. However, when it does, it usually must do so through a bond measure at the polls. Once approved, the proposed project is then implemented through a contractor rather than by the district doing the work.

Dependence on other entities to make improvements has the county relying on agricultural drainage standards from decades ago, Vogler said.

According to Stephen Wilcox, a hydrology engineer with Costello Inc., a local engineering company that helps municipalities study and manage water drainage, the existing engineering standard for stormwater drainage is that it be able to handle 12.4 inches of water in a 24-hours.

However, Fort Bend County is not the only entity struggling with outdated drainage infrastructure. At a recent Katy City Council meeting, Costello presented findings of a study conducted on the water flow during the 2016 Tax Day Floods. During the presentation, engineers and city officials said much of the city’s drainage infrastructure was out of date. Some of the water management tools used standards from the 1980s, Wilcox said, but some may be as old as Katy itself, which was incorporated in 1945, according to the city’s website.

Now, Fort Bend County and the city of Katy are both considering options to improve drainage within their borders, according to officials. Katy Mayor Chuck Brawner is reaching out regularly to state and local legislators to push for a third reservoir northwest of the city to complement the Addicks and Barker reservoirs, he said. A possible flood control district within Fort Bend County would allow the county to improve drainage to meet modern standards, but these things take time.