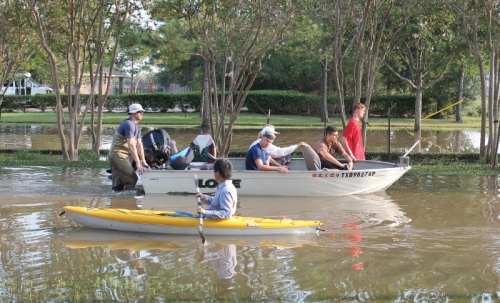 Read the full version of this story in Community Impact Newspaper—Katy's September issue.


Tropical Storm Harvey brought the worst floods on record to the Greater Houston area between Aug. 25-28, with more than 31 inches of rain falling in the Katy area alone.

In the end, more than 60 deaths, including three near Katy, and an estimated up to $108 billion worth of property damage and economic loss related to Harvey were reported across Texas as of Sept. 13, according to news reports and real estate services and investment firm CBRE.

By mid-September, authorities were still compiling data on overall costs to departments for emergency operations during and after the storm.

“Even with the best of preparation, most local agencies were on their own to deal with the wrath of the storm for 36 to 72 hours before state and federal assets were in position to assist,” said Jeffrey Hevey, fire chief at Harris County Emergency Services District 48.

Rescues by the hundreds

Water rescues were the most common calls to Katy area emergency services during and after the storm as floodwaters continued to rise from accumulated rainfall in regional watersheds.

“We have approximately 1,500 evacuations performed,” said Simon VanDyk, public information officer for Harris County ESD No. 48. “Most of these involved multiple people for each call, and some of them involved small groups of people in excess of 20.”

Overwhelmed crews implored residents throughout the Greater Houston area to assist with personal watercraft, while the Texas Parks and Wildlife Department and the U.S. National Guard also provided vehicles.

“Many had professional training as boat captains or fishing guides and were prepared and willing to follow commands,” VanDyk said. “In addition to these teams, we had well over 50 civilian boats that loosely worked alongside us in an effort to assist, but were not officially reporting to our incident command.”

Final data on water rescues was unavailable as of press time, although Russell Wilson said one Harvey-related fatality was known just outside city limits. He said the victim was swept underwater by a fast-moving current while loading up a boat.

In addition, Donald and Rochelle Rogers, 65 and 58, respectively, drowned on Pool Hill Road in Fulshear while checking on family.

By Aug. 30, floodwaters began to recede, shelters around Katy started closing down or consolidating and evacuees returning to their homes.

City and county officials changed their focus from rescues and water management to cleanup and recovery. Within incorporated Katy, City Hall, the Katy Fire Department and old Katy establishments took on water.

Russell Wilson reported an estimated 28 inches of flooding at the fire station, and first responders' vehicles had floated into each other, causing body damage. Fort Bend County Judge Robert Hebert said Sept. 5 the county was in recovery mode, including debris management and damage assessment.

The city of Katy purchased a 2.5-ton truck for $5,000 from military surplus for first responders, Brawner said.

The financial effects of the storm are unknown for now, but CBRE estimated 30,000-40,000 Harris County homes were destroyed, and between $81 billion and $108 billion in property damage and economic loss were incurred in the Greater Houston area.

“We’re going to have to see what it’s going to take to mitigate as much of this as we possibly can, and I feel confident that we will,” Brawner said.