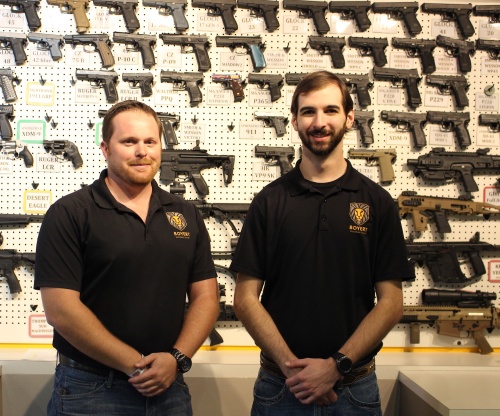 Curtis Alberts said several of his colleagues opened Boyert Shooting Center to welcome anyone ranging from those who have never held a gun to experienced war veterans.

Alberts—the general manager of the Katy-area business—said the firearms industry once had a bad reputation for customer service, but good customer service is key to creating an informed and safe community.

“We wanted to build a place where women, families and the whole community felt comfortable shooting,” he said. “In our trainings, we teach that just because you have a concealed handgun, it doesn’t mean that’s the best option.”

The facility has been on South Mason Road since 2015 when it was bought and rebranded by shooting enthusiasts and veterans, Alberts said. The center focuses on teaching good judgment and the responsibility that comes with handling guns. In the Handgun Essentials Program, Boyert instructors teach guests how to identify a dangerous situation, how to get out of it as safely as possible and how to avoid placing oneself in a potentially harmful environment, Alberts said.

Boyert is the only shooting center in Katy that offers a digital simulator, Alberts said. The room is made up of realistic handguns and a large screen. He said it is a great option for beginners to practice accuracy and speed—and for parents who want their children to practice safe firearm handling without holding a real gun.

Alberts also said they have partnerships around the community, including with the University of Houston Downtown Police Academy and Marine Moms, who use their space to prepare and send care packages to deployed soldiers.

“Just because someone walks into a firearm store, it doesn’t mean that they want to carry or need a gun for self-defense,” Alberts said. “People do it as a sport or hobby. Some come to relieve stress every few months, and others just want to feel comfortable handling a gun.” General Manager Curtis Alberts of Boyert Shooting Center recommends following these guidelines when handling a firearm:
1. Treat every gun as if it were loaded
2. Avoid pointing a gun at anything that is not meant to be shot
3. Keep a finger off the trigger when handling a gun
4. Know what is beyond a target
5. Lock and store guns out of reach from children and others without proper firearms training