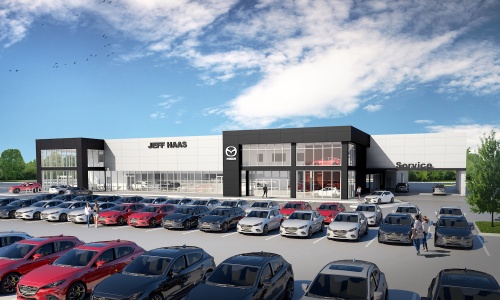 Jeff Haas Mazda will relocate to a new larger location in the Katy area.

A local car dealership is moving closer to Katy and expanding.

Jeff Haas Mazda will relocate his 28,000-square-foot dealership, which includes three buildings located on a 4-acre parcel at 11222 I-10, Houston, to an 8-acre tract of land at 16717 I-10, Houston, that will have a 60,000-square-foot facility, said Rob Walters, the CEO and partner of Signature Project Delivery, the general contractor for the project.

Foundation work on the new dealership began mid-November, and it should take about 10 months to complete, Walters said. Construction was delayed because development requirements changed after Hurricane Harvey, he said.

The opening date is projected to be September 2019, and the new dealership will hold nearly 600 cars, Walters said. He added upon completion the dealership will be the largest new Mazda store in the U.S. Houston-based Goree Architects is the project’s architect.

Haas purchased two parcels of land at 16717 I-10 to build the new dealership, Walters said. According to the Harris County Appraisal District, Hass purchased a 5-acre parcel in 2014 and a 3-acre parcel in 2017. The 2018 appraisal value for both parcels is about $8.2 million.

Walters said he did not know Haas’ plans for the existing dealership. Haas has owned the 3-acre property since 1996, according to the HCAD. The 2018 appraisal value is about $6.2 million.