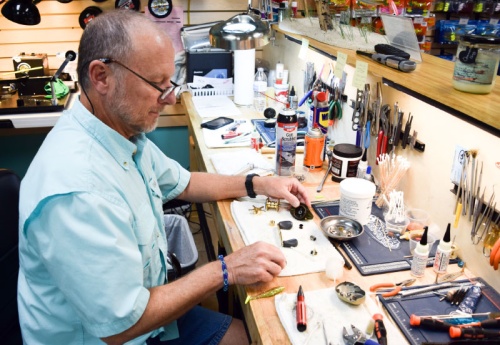 Store owner Mike Butler repairs a fishing reel. Reels have many small parts that can be damaged by sand and saltwater.

Mike Butler and his son Chris Butler run Angler’s Anonymous out of their shop in downtown Katy, selling and repairing specialty fishing equipment for inshore saltwater fishing. They opened the fishing store in June 2017.

“Inshore is typically bay fishing; then you have nearshore, which is like eddies and the surf; and then you’ve got offshore where you go out beyond sight of land,” Mike said.

Mike grew up in Galveston and has been an inshore saltwater fishing enthusiast from a young age. Getting fishing equipment repaired can be expensive, he said.

“A few years ago I started working on my own fishing equipment,” Mike said. “When things would break, instead of paying somebody to do it, I learned how to fix it myself.”

In time, Mike was repairing fishing reels for his friends and family. He had raised his son to be a fisherman as well, so it was something they both knew.

“[It was] a family-operated business with a background in fishing rod and reel repair,” Mike said. “ ... something we could transition to without a lot of learning curve.”

Retail was new to them. Mike said they learn something new about retail regularly, but with the support of their wives and the community, they have learned how to be successful on the retail side.

Mike’s wife, Renee Butler, is an accountant who manages the finances while Chris’s wife, Kayla Butler, helps with promotions and public relations.

Mike said a great deal of what has helped the store succeed has been the local fishing community and fishing guides that partner with the business.

“Fishermen tend to associate with other fishermen and then, you know, [when] something that’s new out there, they talk,” Mike said.