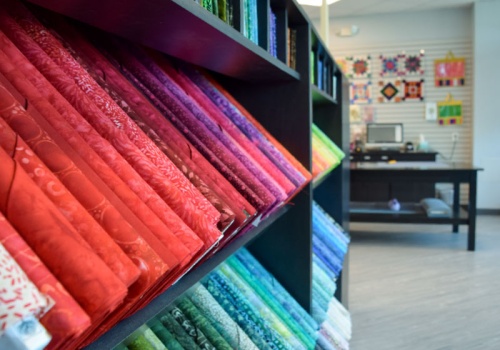 The store sells a wide variety of traditional and trending patterns of cloth as well as sewing supplies. Laurie Mangold, owner of Sew Special Quilts in Katy, has been sewing since she was baby-sitting as a teen. She would sew clothing for the young girls she cared for.

Mangold took a break from sewing as a young adult, but when her daughters were born, she decided she wanted to get back into the hobby.

“I was self-taught. I just kind of hacked at it,” she said.

The business offers a variety of classes from a basic course on how to use a sewing machine to more advanced quilt work. Mangold said the store is there to support customers regardless of their level of experience.

When Mangold first started with Sew Special Quilts in the early 1990s in San Antonio, she had just gotten back into sewing. She would go to the store—then located in Boerne, north of San Antonio—for help with her sewing, she said. She became attached to the shop but saw that it was struggling.

Mangold said she decided to invest what was at first a small amount of money in the shop to help it get back on track. She said it soon became apparent she would have to either move the business into bankruptcy with the previous owners or buy the business outright. Mangold and her husband decided to buy the business.

The store was successful enough that Mangold decided that she wanted to expand. She kept her ear to the ground and when a location in Katy became available, she opened her second shop.

When another sewing shop closed on Westheimer Parkway near Houston, Mangold said hobbyists were concerned about finding a nearby resource for their supplies and classes.

“Most of the people were feeling like, ‘What are we gonna do now?’” Mangold said. “And so, when they heard I was gonna open here, they were very, very excited, and they’ve been very, very receptive.”

Since Mangold first started sewing, she has developed her skills and industry knowledge and now teaches classes.

Mangold said she is excited to see a younger crowd getting into sewing and quilting; she helps them stitch their way into the hobby by signing up for classes at the store.

“The most popular class that we do both [in Katy] and in San Antonio is called $5 Quilts, where you come in once a month for 30 minutes, and we teach you how to make just one square of the quilt,” Mangold said.

The $5 Quilts course lasts 12 months, and there is a $10 fee for each class which includes the kit for that month’s quilt block. At the end of a year, students have a dozen blocks that staff can then teach them to assemble into a quilt.