Mother, daughters with a mix of styles run RueBird Market in Katy 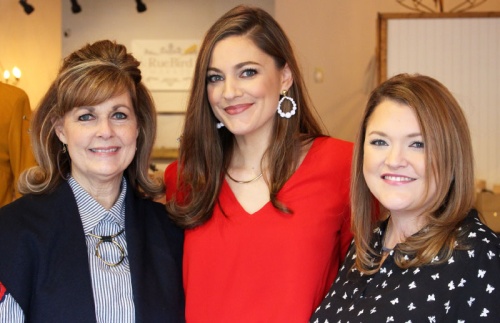 When a boutique caters to a range of sizes and ages, it helps to have owners with that same variety of perspectives. That is why Sarah Shepard and her daughters, Elizabeth Morris and Katie Rue, try on everything that comes through their Katy shop, RueBird Market.

Shepard and Rue launched the women’s apparel and decor business in a 1962 Airstream trailer, which they took to holiday markets and pop-up events, and sold their eclectic mix of clothing, accessories and household goods for a year. Rue was an event planner but shared a lifelong passion for decor and design with her mother.

After generating a following, they parked the trailer and opened a storefront in LaCenterra at Cinco Ranch at 23501 Cinco Ranch Blvd., Ste. G125, Katy, in June 2016. Rue liked the mix of retail, dining and entertainment.

“So that was important to us, being a new business, that we would have visibility that people would just already be in this area walking by and they would come in,” she said.

Morris is the store’s manager. A fourth employee also works at the shop.

The name RueBird is a portmanteau of Rue’s last name and the Blue Bird Thrift Shop in San Antonio, where the sisters’ great grandmother used to volunteer. As Shepard put it, the store’s namesake was unconventional for her time.

“She was probably one of the few women her age who had a career and a family and made it work, and was successful, very successful,” she said.

“There’s an artistic point to it that it just has to speak to my mom and I, and we both have to agree on it that we like it,” Rue said.

Looking ahead, Rue said they would entertain the idea of a second retail space but their current location keeps them plenty busy. More window displays are due to be added in the store while she and Shepard also have an interior decorating operation for Longlake Builders’ model homes.

“We’ve still got room to put more stuff in this space, believe it or not,” Rue said. “And actually, that’s the plan.”
SHARE THIS STORY