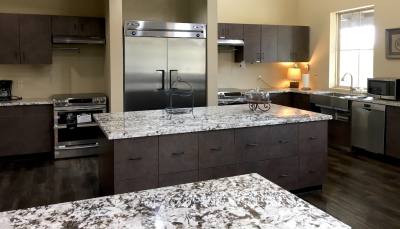 The Ballard House in Katy is reopening after the damage caused by Tropical Storm Harvey was repaired.

After more than four months of repairs and 14 fundraisers, The Ballard House has begun welcoming families back to its guest rooms. The Cinco Ranch hospitality house took on between 3 and 4 feet of water during Tropical Storm Harvey, but Executive Director Kathy Alt said efforts from the community have allowed the facility to reopen.

The 20,000-square-foot Ballard House at 21421 Cinco Park Road, Katy, opened to provide complimentary housing for patients and their families traveling to the Greater Houston area to receive medical treatment. It is equipped to house 24 families at once and 28 people were evacuated from the facility during the storm, Alt said.

Repairs began Sept. 1. Four feet of interior walls and 8 feet of exterior walls were removed, as was much of the furniture, food products, paper goods and other items on the building's first floor. Alt said about $115,000 was needed to complete repairs—the house had natural disaster coverage for the structure but nothing for its contents—and nearly $120,000 was raised through various fundraising efforts.

New floors, kitchen appliances and countertops were installed while some furniture, food and other items were donated. Alt, who is the Ballard House's only full-time employee, said she was amazed by the generosity of the Katy community, especially local school children and scout troops.

The first families came back on Saturday, but the house will not fully reopen for nearly another month. Despite the setback, Alt said they still plan to expand on the building's east side, which will open next spring.

The new wing will get its own kitchen and living rooms, as well as 16 guest rooms. The Ballard House will also expand its laundry capacity to handle the growth, which Alt said is needed to accommodate the demand from prospective guests and the future University of Texas MD Anderson Cancer Center outpatient diagnostic and treatment center near I-10 and Hwy. 6.
SHARE THIS STORY