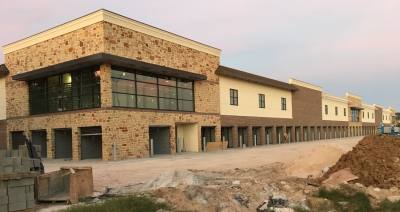 A CubeSmart facility is being built in Katy along Westpark Tollway.

Several commercial sites are under construction along Katy’s segment of Westpark Tollway/FM 1093 near the Barker Reservoir. One such project is a 20,000-square-foot retail strip from Houston-based development enterprise Peek Entrepreneurs.

The first tenants at the future Y Shops at Peek Road will open within two months and so far include a vape shop, a hair salon and a dry cleaners, according to Ali Wadhwan of Peek Enterpreneurs.

The strip is located on the east side of Peek Road, approximately 340 feet north of Westpark Tollway/FM 1093. Construction is expected to end in less than a month.

In addition, Wadhwan said a Dairy Queen would be opening by February in the nearby gas station at 21648 FM 1093, Richmond.

Farther east along the toll road, a CubeSmart self-storage facility is underway near the northeastern corner of Westpark Tollway/FM 1093 and Mason Road. The site is surrounded on three sides by a Shell gas station and the Waterstone at Cinco Ranch luxury apartment complex.

According to property records from the Fort Bend Appraisal District, the property owner listed is CH Realty VII-WD I Houston Mason Road Self Storage LP. Robert Wheless, co-manager and partner at Wheless-DeSpain Interests LLC, said his company is a general partner and development manager for the project.

Wheless said the building will have 829 total climate-controlled and noncontrolled units, including 11 RV storage and surface units. The storage units range from 5 square feet wide to 10-by-30 feet wide, he said.

The 106,000-square-foot CubeSmart Mason Road location is expected to finish construction by Jan. 15 and open soon after. The site encompasses about 2.84 acres and its 2017 assessed value was $738,120, according to FBCAD.
SHARE THIS STORY