Primary election 2020: Here are the candidates on the ballot for Houston’s Inner Loop state representatives and senators

Voters will have a chance to decide Republican and Democratic nominees in the March 3 primaries. (Courtesy Adobe Stock)

Voters will select from Democratic and Republican candidates in races for U.S. President down to local and county district judges during the March 3 primaries. The filing deadline for candidates in the March 3 primary election passed Dec. 9. The last day to register to vote is Feb. 3, and early voting will begin on Feb. 18. A runoff is held May 26 for any primary in which no candidate receives 50 percent of the vote. On Nov. 3 Republican and Democratic nominees will face off in the general election.

Here are the candidates running for Texas House and Senate offices representing much of Houston’s Inner Loop. Find which state representatives and senators cover your area here.

A special runoff election will be held January 28 between Luis La Rotta and Anna Eastman for House District 148. The winner will serve the remainder the term held by State Rep. Jessica Farrar, who retired in September. The last day to register to vote in the special election is December 28. Early voting for the special election will begin January 21. La Rotta and Eastman will also appear on the primary ballot in March to compete for a place in the November, 2020 election which will determine who will serve District 148's next term beginning 2021.

The boil-water notice is a state-mandated precaution.

See which Houston area offices and businesses may be impacted by the water leak. 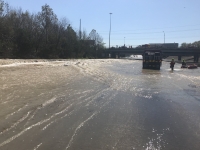 It is not clear what the subject of the investigation is.

It will be the third Houston location for the national healthy fast-casual concept.