The city of Houston has been studying parking demand and pricing in a part of Midtown, depicted in this map, since January. (Courtesy Google Maps)

Houston officials are mulling a series of parking policy changes in Midtown, some of which may reduce congestion in the popular nightlife and dining destination.

The city has been studying the area’s parking demand and pricing since January, according to Maria Irshad, assistant director in the Houston Administrative and Regulatory Affairs Department.

“We have limited curb space. We can’t build any more, so we need to manage it effectively,” she said at a June 24 City Council transportation committee meeting.

Nearly half of the area’s parking spots are filled for 85% to 100% of peak hours. This encourages drivers to circle the area in search of street parking, she said.

Drivers searching for parking spots make up most of the area’s traffic during the peak hours, an issue Irshad said could be mitigated by encouraging visitors to carpool as well as use rideshares, public transit or other forms of transportation.

Council members will be presented with two potential policy changes by the end of fall, Irshad said. ParkHouston also extended parking hours from 6 p.m.-midnight at the end of August.

The department may also increase parking rates on any parking meter occupied for 85% or more of daily parking hours. That change, however, is one that is still under consideration, Irshad said.

The first potential change going before council is the establishment of a parking benefits district. The designation gives a portion of parking fee revenue to the Midtown Management District.

The management district is made up of area business owners who collect a fee on commercial properties to use on infrastructure improvements with its boundaries.

“It’s just not worth it for a parking lot owner to try and charge for the supply that they have available since people would rather circle for a free space or go park in a neighborhood,” said James Llamas, the urban planning chair of the Midtown Management District’s board. “I think the city [is] taking a good first step in smarter management.”

City Council will also consider the establishment of a community parking program in the outlying areas of the neighborhood, outside of the parking benefits district. Within the program’s boundaries, which are not yet drawn, residents would get parking passes, and nonresidents can be limited to no more than three hours of parking. 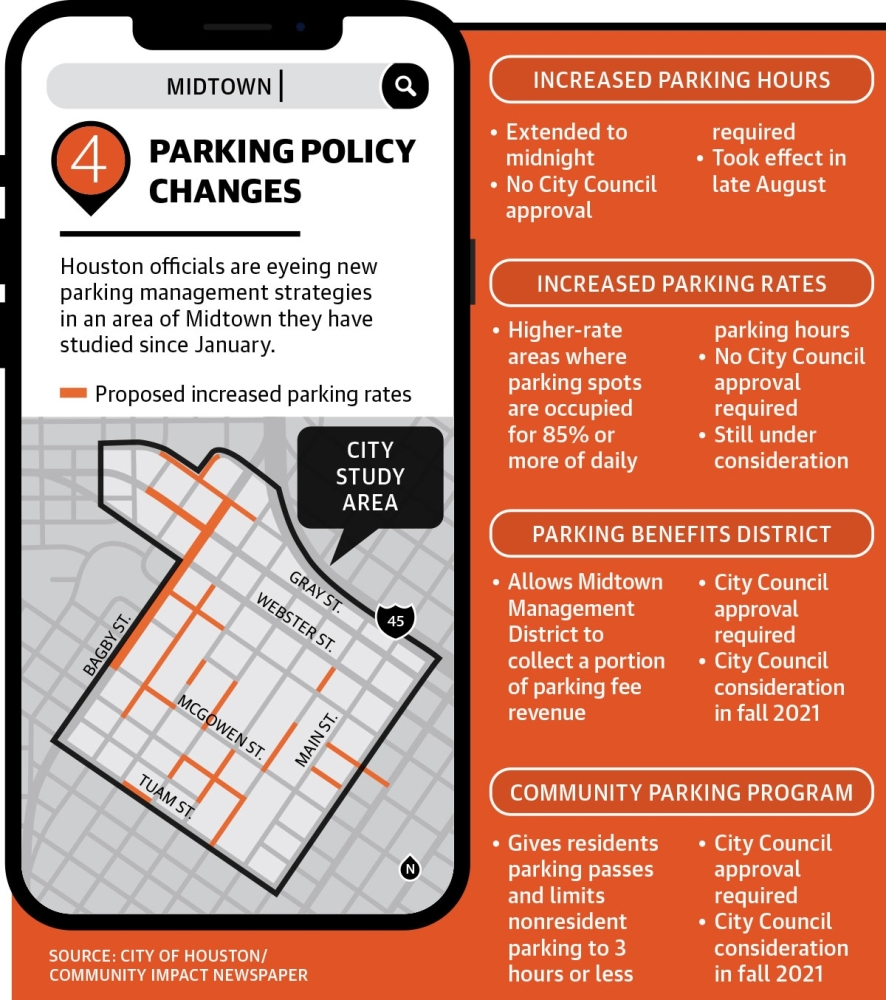