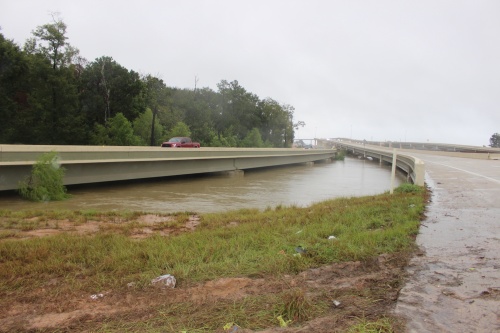 Houston Mayor Sylvester Turner and the city’s public safety officials continue to urge drivers to stay off the city’s roadways while floodwaters recede.

“There are still roadways that are past impassable right now and especially feeders and side streets. This is still not a good time to get on the road,” Turner said.

Tropical Depression Imelda inundated many of Houston’s roads and highways throughout the morning and early afternoon. As the conditions lighten, Turner said at a 3 p.m. press conference at the city’s Office of Emergency Management that floodwaters will still present a risk to drivers for several hours.

Houston police and fire officials said the departments have fielded over 3,000 emergency calls throughout the day, well over the city’s average call volume per day. Those in immediate danger should call 9-1-1 however those who are inconvenienced by flooding events but not in danger should stay in place while floodwaters recede, Turner said.

“Our first responders are having to utilize the same roadways to get to certain points and it makes it much more difficult for our first responses to give to the people who need their help,” Turner said.

Several temporary shelters, listed below, have opened in the Houston area for stranded individuals to take refuge in.

All area hospitals are operating normally except for Memorial Hermann Northeast Hospital, which took on water but is still maintaining operations.

Editor's note: this post has been updated to include the correct Gallery Furniture shelter location.