A petition circulated by a group of local political groups known as the Houston Charter Amendment Coalition had its signatures verified by the city secretary July 6. After a city council debate, the amendment will appear on the November 2023 ballot. (Emma Whalen/Community Impact Newspaper)

When the Houston city secretary’s office finished verifying a petition submitted by organizers aiming to change power dynamics at City Hall, the group behind the petition said they did not expect they would have to wait two years before their proposal will be up for a citywide vote.

By invoking a clause in the state constitution, City Council members were legally able to file the item on the November 2023 ballot, despite an election date approaching this November. The mayor and council members who supported the move cited election costs and a potential low turnout as reasons for the delay.

“The cost of this election will be $1.3 million for a very, very low turnout,” Mayor Sylvester Turner said.

Others, however, said political influence could have played a role.

“I’m sure the mayor pulled in council members’ votes by saying, ‘This is what I want,’’’ said Bob Stein, a political science professor at Rice University.

At the same time, the Houston firefighters union is awaiting the verification of signatures on a petition it submitted to the city secretary’s office July 11. After Harris County’s Aug. 16 election filing deadline passed, it became clear the union’s proposition will not go before voters this fall either.

“Regardless of what people’s personal opinions are about a particular item, ... the ability to petition your government is a sacred process,” said Marty Lancton, president of the Houston Professional Firefighters Association.

The two missed opportunities for a November election kicked off a debate about Houston residents’ access to power at City Hall.

“You don’t want too many elections because that does increase the cost to taxpayers and potentially causes voter confusion but ... you want to make sure there’s an opportunity for elections to be held in a timely manner,” said Kellen Zale, an associate professor at the University of Houston Law Center who specializes in local government law.

The two petitions circulated throughout the year aim to alter the city charter in different ways.

The first proposal, circulated by a bipartisan group known as the Houston Charter Amendment Petition Coalition, aims to change the charter so any City Council member can place an item on the council’s weekly agenda as long as two other members back it. The effort is supported by wide-ranging groups, including the Houston Democratic Socialists of America and the Harris County Republican Party.

As it is written, the charter only allows the mayor to place items on the agenda.

“Compared to every other city in the top 30 [most populous], ... nobody bestows this amount of authority to their mayor,” Stein said.

Opponents of the measure said it will make City Council proceedings gridlocked and unproductive.

“I don’t think we should change things midstream in the middle of an administration just because of personality differences,” Vice Mayor Pro Tem Martha Castex-Tatum said during the council debate Aug. 11.

The second charter amendment petition lobbied by the firefighters union proposes a requirement that the union and the mayor enter binding arbitration in the event of an impasse in labor contract negotiations. In this process, both parties present proposals to an arbitrator, who has the final say on the terms of the contract. Unlike the current mediation process, both parties are legally required to come to an agreement, according to the Texas Local Government Code.

The effort is the latest in a labor contract dispute between the city and the union that has resulted in numerous lawsuits and prevented the parties from agreeing to a contract since 2017.

“This is a fair and safe way to resolve contract issues,” Lancton said.

Turner, however, said other union negotiations proceed effectively without arbitration, including negotiations between the city and the municipal employees union as well as the police officers union.

“The city is ready to negotiate with the firefighters union through the regular course of business,” Turner said after the petition effort was announced. 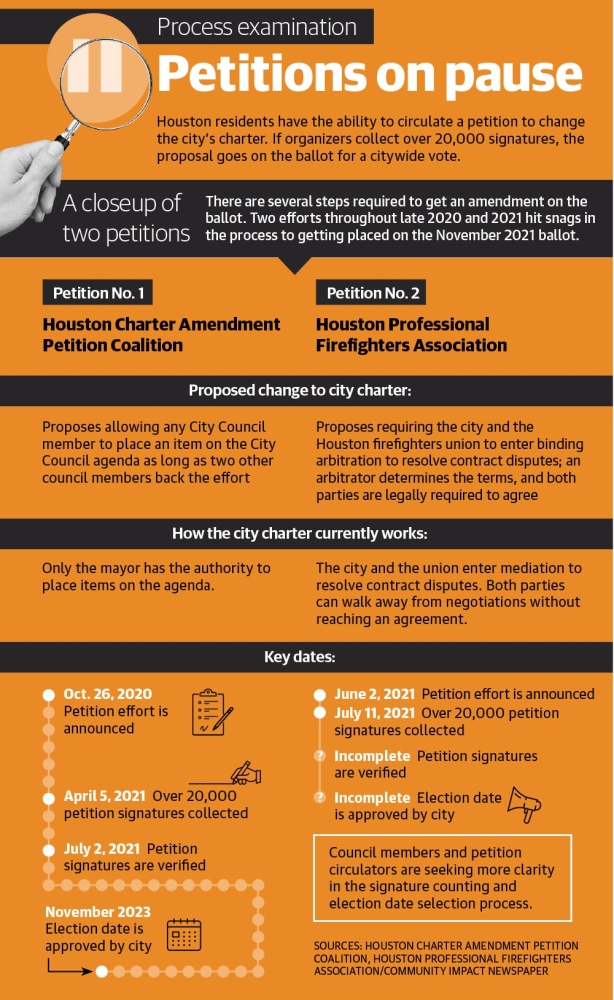 Both petitions passed the state-required 20,000 signature threshold to have their proposals go before a public vote but hit snags in getting the vote on the ballot this November. The first petition, regarding the City Council agenda, made its way to the final step.

The Texas Constitution allows the City Council to choose the soonest possible election date or the sooner of the next mayoral election or presidential election. Houston City Council members debated whether to put the petition on this November’s ballot or the November 2023 ballot.

“The language is ambiguous,” Zale said. “But it does seem to allow the city to do what it’s doing.”

The majority ended up choosing the 2023 election date, citing various reasons. Some stated it will have better turnout because it will also fall on the next mayoral and City Council race, and others noted the estimated $1.3 million cost to host an election is too high for one proposition.

“[The election date process] really does have to be tightened up just so people in the community can have an expectation about how it works,” said Council Member Tiffany Thomas in a phone interview.

However, Stein said the delay could prove the petitioners’ point. Many council members sided with the mayor by choosing the 2023 date, which will come just before Turner, who is term limited, leaves office. They may have done so, he said, in fear of losing his support for their priorities.

The mayor may have also exercised his influence over the firefighters petition, Stein said. By the time of the Aug. 16 election filing deadline, the city secretary’s office was “about halfway through” counting the signatures, according to a statement from City Attorney Arturo Michel.

“You don’t have to count every signature. You can do an audit,” Stein said. “If it was a proposition that he supported, he would’ve fast-walked the count.”

Turner, however, told City Council members Aug. 11 that a faster count would require more staff and funding. The city secretary verified the signatures for the council agenda petition in three months.

Stein, Zale and several council members said a lack of clarity in both the city charter and the Texas Constitution led to the debate over election dates and signature counting procedures.

“I’m trying to figure out ways that we can inject some kind of more certainty into this process,” Council Member Sallie Alcorn said in a phone interview. “We don’t have a specific ordinance or policy or anything really dealing with how the city approaches these.”

Within the city charter, both council members and organizers have also seen the need for clearer rules about how long cities have to count and verify petition signatures.

“The city needs to do its ministerial duties and not engage in voter suppression,” Lancton said.

Austin and San Antonio, for example, have timelines in place to count signatures. According to Austin’s city secretary’s policies, the office aims to verify signatures within 12 to 15 days. Similarly, San Antonio’s city charter states officials are required to complete the count within 20 days.

It is not yet clear whether any policy changes will occur at the state or local level to prevent the election date issue from arising again.

“We did everything that we were required by state law and by the city charter to do,” Blain said. “So we expected the city to do what was right as well.”