A mural by Sebastien MrD1987 Boileau is promoting Census participation in the Montrose area. (Courtesy City of Houston)

If only 1% of the Houston population is undercounted in this year’s census, the city stands to lose as much as $250 million in federal support over the next 10 years, according to estimates by local officials.

One area where an undercount could occur is in Montrose, where renters account for 66% of residents, compared to 45% of the city as a whole, according to census estimates. Moreover, 29% of residents have moved in the past five years, compared to 17% of the rest of the city. It has been flagged as one of five “hard to count” areas of the city.

“Renters across the board typically respond at lower rates than homeowners. It’s that transitory nature of being a renter, there’s often less of a tie to a community,” Houston Director of Planning Margaret Wallace Brown said.

In addition to being home to younger residents and renters, the area is known for its support services for the LGBT community, the homeless and other populations.

“There has been a lot of work since 2010 to increase LGBT representation in the census, and we did make progress, and it looked like new questions were going to be added, but that did not make it,” said Marcus Hook, a community projects specialist for the Montrose Center, referring to an effort to include sexual orientation and gender identity questions that was cut short in 2017.
RELATED STORIES

• Ready to go out again? Dining rooms, patios open for guests in the Heights, River Oaks and Montrose starting May 1

• As state restrictions ease, some Houston restaurant owners hold off on reopening

The U.S. Census Bureau did adjust its question options around opposite- and same-sex couples, he said.

Having less representation on the census form itself is one factor that can be discouraging to some populations, resulting in lower response rates.

Having higher self-response rates is preferred because it results in more accurate counts, Brown said. Those who do not fill out the form should still be counted by census enumerators, who conduct in-person interviews to gather the data. 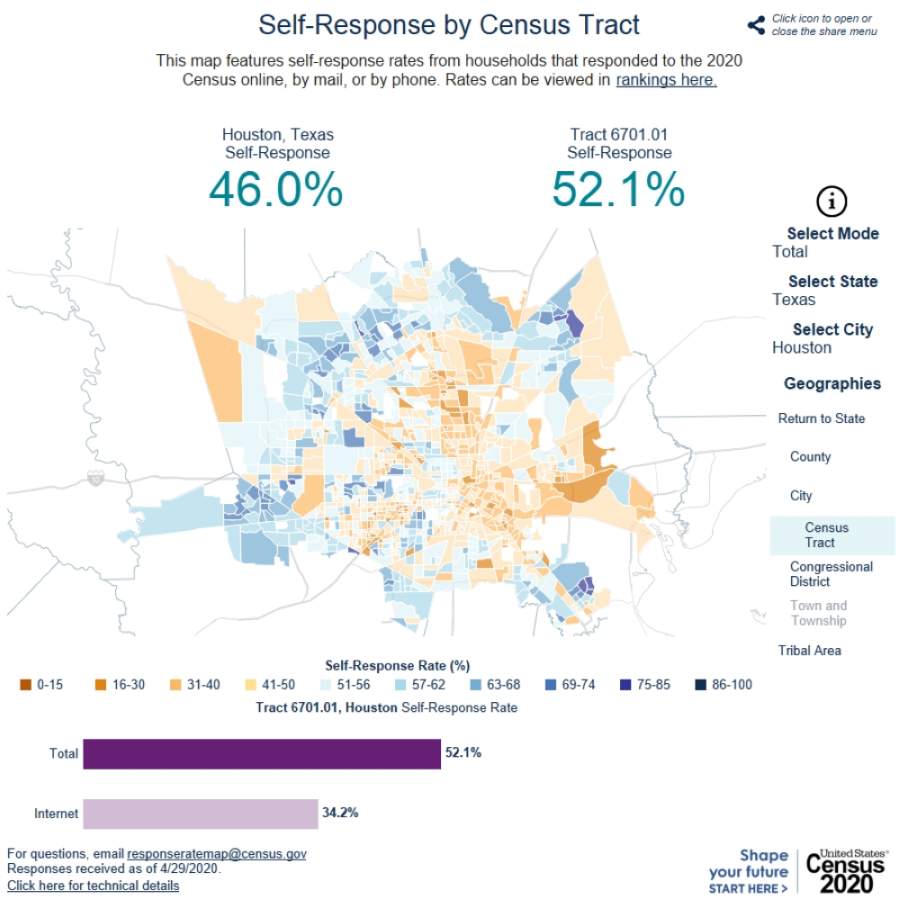 The U.S. census collection effort began in mid-March, with forms being sent to every housing unit across the county. The response rate is calculated based on how many forms are returned or submitted online for each home or apartment unit. The form asks for the name, age, gender, ethnicity and race of each occupant.

By late May, unresponsive housing units will begin to receive more direct outreach from census takers dispatched throughout the community, though that timeline could change based on the federal government’s response to the coronavirus outbreak. Until then, local efforts remain focused on getting the word out that everyone needs to be counted. The final date to submit a response was pushed to Oct. 31 from July 31.

“Things have changed with the coronavirus, but our strategy hasn’t changed as much as our tactics have changed,” said Nabila Mansoor, who co-chairs the Harris County/Houston Complete Count Committee, a collaborative effort of city and county officials, community leaders and nonprofits.

Instead of doing in-person outreach activities such as canvassing, Mansoor said the emphasis has shifted to digital channels, but the campaign is also making the most of its community-based relationships.

“All of our partners have been spending a long time trying to figure out how we make that really big push to our particular communities to respond to the census,” she said.

David McClendon, a data scientist with January Advisors, a firm that is consulting with the city’s outreach campaign, said the team is able to track response rates daily and adapt to local conditions amid the outbreak.

“We’re actively identifying those places, like food bank sites, where people are still coming out,” he said. “We’re reallocating resources and messaging where those locations are and where they overlap with the lowest self-response scores so far.”

The 2020 census is also the first time residents can participate online, which Mansoor said makes her optimistic the effect of the coronavirus will not be as pronounced.

What is at stake

As results are tallied and formally reported by the end of this year, the numbers will trigger a recalculation of how future federal dollars are allocated for the next decade, though some may hesitate to share what they believe to be private information.

“A lot of folks just think it’s not important to answer it ... but it is incredibly important. And it’s important to know the answers you provide are protected by law; they cannot be shared with anyone else, they are safe and confidential,” Brown said.

That protection extends to other government agencies. As a planner and government official, Brown said she uses census data daily and knows there are many questions the data cannot answer because the full dataset, including individual housing unit breakdowns, is not provided.

For nonprofits such as the Montrose Center, census data can help justify grants and programming decisions and more broadly give a voice to underrepresented groups.

“It allows us to see the structure and shape of our communities and direct the outlook of what happens to our nation,” Hooks said.

Census data is used in calculations to determine the amount of federal assistance cities and counties receive from programs, such as the Medical Assistance Program and the State Children’s Health Insurance Program. For each person counted, the federal government will allocate as much as $1,500 to the state of Texas each year, according to estimates.

“For those programs ... we’re paying it in taxes already, but may not see the full benefit as a state and locally if we’re undercounted,” McClendon said.

A vast array of government programs and projects draw on insights from the official count, including how road construction projects are prioritized and funded, how foster family programs are supported and how school lunch programs are offered, Brown said. City services, from libraries to fire stations, also look to population counts to determine areas of need.

“Even businesses use it daily to decide what products to sell and where to put their next store, to relocate or to invest in an area,” she said.

The data is also used to determine how many congressional representatives each state has and how their districts are drawn. The boundaries could also shift for city and county offices as well, affecting elections for the next decade.