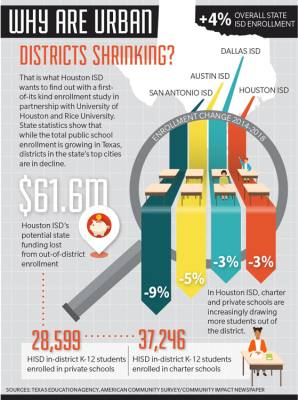 Amid a state investigation into its governing board and a freeze to its superintendent search, Houston ISD officials are confronting one more troubling reality: a drop in enrollment.

To avoid a costly decline, officials are ramping up marketing efforts with messaging designed to emphasize college-readiness efforts and have partnered with the University of Houston and Rice University for the district’s first-ever comprehensive look at what factors are driving the enrollment changes.

“We want to dive deep and learn the why, and go beyond the data we have now. What’s going on? What are the contributing factors?” said Rick Cruz, HISD’s chief strategy and innovation officer. “We can then determine if it’s an issue with communicating what we do or improving what we do.”

Schools in the Heights, River Oaks and Montrose areas, however, are showing increases in enrollment, and are projected to continue to grow, officials said. The region has some of the district’s top-performing schools and popular magnet programs, attracting students from the entire district.

“There’s no doubt the west side, there are schools like Lamar [High School] that draws from the whole district. It’s like a microcosm of the district,” HISD trustee Anne Sung said.

And in cases where schools are not attractive, some parents have taken it on themselves to help drive a turnaround. One example is Learn Local, a nonprofit that has raised tens of thousands of dollars for Hogg Middle School in the Heights area.

“People would say, ‘There’s no way my kid is going there, unless something happens,’” said Emily Guyre, a parent who founded the group in 2016. “Now there’s a waitlist.”

The school added International Baccalaureate, or IB, programming in 2013, which raised its appeal, she said.

“We need to understand if this is a larger trend,” Cruz said. “A big part of the decrease is happening at the elementary level, which means it could be a harbinger of what is to come. And so, how much of this is really in our control?” From 2014-18, elementary school enrollment, not including prekindergarten, has dropped almost 3% districtwide. Even in the northwest Inner Loop, kindergarten through fifth grade declined by 1% in 2018. In the same time period, U.S. Census data shows HISD’s school-age population grew by 2.5%.

National statistics have differing projections for demographic trends. On one hand, the U.S. Department of Education estimates total K-12 enrollment in Texas will increase by 15% by 2027. Another study by the Western Interstate Commission for Higher Education projects a national decline of graduating seniors by 6.5% by 2027, principally led by a decline in birth rates.

“Declining birth rates is absolutely a key factor in play,” said Bob Templeton, whose firm provides demographics reports and consulting to over 80 school districts in Texas. “We detected a drop in kindergarten enrollment about four years ago, and it’s been continuing to decline. That had never happened before.”

Millennials are waiting longer to establish households and have families, he said, and without immigration, many areas would be stagnant or would shrink even more.

Another factor is affordable housing, he said.

“We are seeing that in Austin; housing has become so expensive that populations are moving out. That is definitely taking place,” Templeton said.

On billboards, social media and movie-theater ads, HISD will tout its college-readiness credentials, featuring students who gained acceptance into Columbia University, Harvard University and others.

These success stories are from Cruz’s Emerge program, which is funding part of the marketing plan. Emerge, which received $13 million from the Houston Endowment last year, adds resources and after-school programs to prepare potential first-generation college populations for higher education and beyond, Cruz said. With over 2,000 students in the program, it is proving to be very successful, he said.

“We’re seeing 95 percent of students graduate in four years or are on track to do so, and we are talking about mostly low-income, minority students who generally have lower retention and graduation rates,” he said.

Data from the Texas Education Agency shows HISD has been losing an increasing number of students to non-district charters. As of the most recent school year, more than 38,000 students have transferred out of the district, with over 90 percent of them going to charters, and almost half of those going to KIPP and YES Prep schools. Only about 3,000 transferred in, meaning HISD had a net loss of about 35,000 students, or about 16.7% of its current enrollment. The district’s overall population has grown, so charters’ effect on enrollment is smaller than it would be if the district were shrinking.

Because these are out-of-district charter schools, HISD does not receive any funding allocations for those students. With its state funding allocation averaging a little over $1,000 per student according to the TEA, that means HISD missed out on as much as $35 million—roughly equivalent to its current budget deficit—in 2018.

Inner Loop residents also have access to high-performing private schools, and estimates by the U.S. Census show they could be increasingly preferred, with an enrollment of about 28,600 in HISD’s boundaries in 2017. That is up by 7% in four years.

In schools located in the Heights, River Oaks and Montrose, an estimated 5,000 students in the district attended private schools in 2017-18, an analysis of district data shows. Another 1,000 attended charters.

Competition is about to heat up, as IDEA Public Schools, a successful charter system that launched in the Rio Grande Valley, is set to open four campuses in Houston in 2020, with plans to eventually have 16 more.

This competitive environment is forcing schools to rethink their entire approach, Templeton said.

“Today’s parents are expecting schools to be more customer service-oriented,” he said. “Schools are used to a mindset where things are rigid, from bell times to pickup and drop-off. … But parents now have a choice.”

Amid these competitive forces, the district is mired in a potential state takeover of its governing board, a situation that is eroding trust among parents, who have the option to move or enroll their children elsewhere, said Jasmine Jenkins, executive director of Houstonians for Great Public Schools.

“People recognize that and don’t want to invest their children’s future in something that’s obviously not moving forward,” she said.

District officials acknowledge these concerns are a factor, and the study will help school officials hear parents’ concerns and address them, Cruz said.

“At the end of the day, regardless of what’s happening outside of our schools, we need to do what’s right for our students,” he said.

By expanding programs such as Emerge and looking at improving access to IB coursework, the district can become even more competitive, he said.

“There’s a misconception out there that a charter or private school is the only way to get a top-notch education,” HISD Chief Communication Officer Rebecca Suarez said. “But we have programs at every school that can match that.”

For Gloria Pereira, president of the Lamar High School parent-teacher organization, sending her two daughters to public schools was an easy decision, as long as they could make the list.

“The schools we have here are really good,” she said. “Nothing can really compete with that.”

Note: The article was edited to clarify that 38,000 students are attending schools outside of the district as of this year—not in addition to previous years.

The O’Quinn Medical Tower will also be part of the expanding McNair Campus.