Cuchara offers tastes of Mexico City and 'cooking from the heart' The walls and ceiling are adorned by murals crafted by Anau2019s sister, Cecilia Beaven, a recent graduate of the Art Institute of Chicago and a Fulbright scholar.

For Ana Beaven, there are two ways to get an authentic Mexico City meal in Houston. The first: Hop on a plane and go there. The second: Visit her restaurant, Cuchara.

“No one has the flavors we have,” Beaven said. “Mexico City represents the best of the best of Mexican cuisines, bringing many styles and flavors together. Every staple is represented well.”

Because of its role as the cultural and commercial center of Mexico, the city inherited cuisines from around the country and often showcases the best meat and fish in its dishes, she said.

By focusing on this heritage, Cuchara resists the Tex-Mex mold: Diners will not find chips and salsa on the table, mariachi music on the speakers or chile con queso on every dish.

“This is a contemporary cafe like you would find in Mexico City,” said Beaven, who grew up in Mexico’s capital city. “There was a risk in doing that of course … but from our first month, I knew it would work.”

The restaurant serves brunch and dinner, and its weekday lunch special—called “comida corrida”—changes daily but offers three courses for busy workers. The menu has grown, but it stays true to its roots, Beaven said, offering only authentic Mexican recipes, such as chilatole, a creamy soup of corn masa and serrano pepper, and mole negro, which is made with 34 ingredients.

Some of the recipes come from family members, such as the Asado de res Doña Julia, which is 150 years old, while others are inspired by Mexico City street vendors, such as the Tacos Chelo.

Carrying the menu are the same four Mexican mothers who were cooking in the kitchen when the restaurant opened almost seven years ago this September, a point of pride for Beaven.

“My grandma is the best cook I know, and that’s what I want to have here, cooking from instinct and cooking from the heart,” she said. 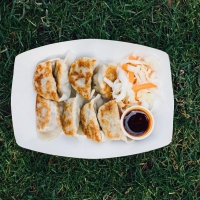