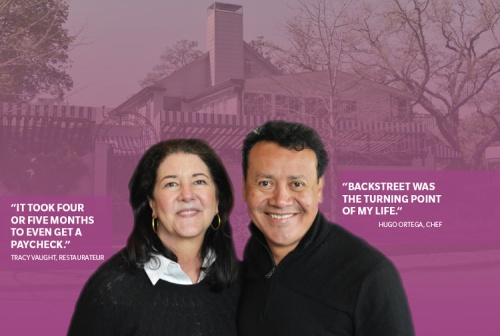 Restauranteur Tracy Vaught and Chef Hugo Ortega have been a part of Backstreet Cafe for over 30 years.

When Tracy Vaught left her career as a geologist for Conoco in 1983, she decided to take a risk and break into the restaurant industry.

“I started thinking, ‘Do I really want to do this anymore? Do I want to do something else?’ And I’d always been interested in food,” Vaught said.

As she began to look for locations to open a restaurant, she spotted a house for sale across the street from her tailor. Her uncle, Jack Blalock, a Korean War veteran, helped her get started.

“I was scared that it wouldn’t work out, and I was naive in that I had never worked at a restaurant before or anything like that,” Vaught said. “It was a slow process at first. … It took four or five months to even get a paycheck.”

The restaurant started as a spot for soups, salads and sandwiches but has transformed over 35 years into one the most awarded restaurants in Houston. Its evolving chef-driven menu draws on multiple cultures and prides itself on elegant presentation and fresh ingredients. Take its duck egg rolls—Asian-inspired but somehow look and taste like no egg roll diners may be used to.

Decorated staff have come through its kitchen, but one who came and never really left was Hugo Ortega, first hired as a dishwasher in 1987.

“I didn’t know it at the time, but he was homeless when we hired him,” Vaught said.

After working as a dishwasher and a busboy, Ortega expressed an interest in the kitchen. Vaught put him through Houston Community College’s culinary program and he was mentored by Prego’s chef John Watt.

Vaught and Ortega, who married in 1994, have grown their influence with the H-Town Restaurant Group, which operates Hugo’s, Xochi and Caracol, among other venerated restaurants.

“Backstreet was the turning point of my life,” Ortega said. “There have been many triumphs, and of course they started when I got there, and it gave me the opportunity to learn my vocation.”