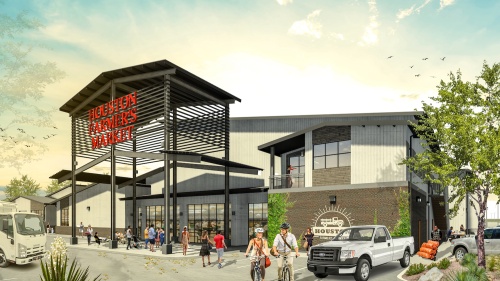 A rendering shows the front entryway of the market reimagined with modern upgrades.

Just over two years after purchasing the historic Houston Farmers Market, developers broke ground on a project Aug. 6 that they said will turn the fresh produce marketplace into an even bigger food destination without leaving its 76-year heritage behind.

"I’ve been coming since I was a kid in 1975, the first time my parents brought me—we would pick out watermelons, pumpkins, sugar cane and cinnamon sticks, dried peppers, all that type of stuff," Todd Mason, managing principal for MLB Capital Partners, told Community Impact Newspaper. "Personally I was very connected to it, and I want to see that it remains."

The 17.67-acre site at 2520 Airline Dr., Houston, had about 180,000 sq. ft. of retail space supporting over 80 vendors. The new plans call for adding around 50,000 square feet of functional space, which will help support five to six restaurants as well as space for six to 10 counter-service concepts that would offer diverse, appealing drink and food options, Mason said. New tenants being eyed, with the help of chef Chris Shepherd, include butchers, bakers, fishmongers and other producers.

"We don't want to be a food hall. It's offering so much more than that," he said. "And a lot of it will remain familiar—the open-air market."

"Our goal is to be a big amenity for the area but also to bring in the whole Houston area, people from around the country and even the world, really," Mason said.

He said the improvements have been well received by the current vendors, who will not have to leave the site during construction. They have been moved to a temporary tent on-site and will shuffle around as the new facilities finish construction, he said.

With construction underway, a late 2020 or early 2021 grand-reopening is the target. Clark Condon Associates, Studio RED Architects, Gunda Corporation and Arch-Con Construction are part of the project team.