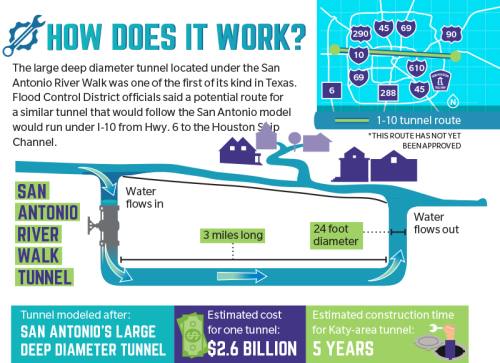 An initial study by the Harris County Flood Control District has found that Houston's similarity to Washington, D.C., means that the area could be a viable candidate for a large drainage tunnel deep underground.

The nation's capital already has two such tunnels as part of an effort to improve drainage and protect its rivers, providing a useful case study for the project. In Texas, a tunnel was drilled for the San Antonio Riverwalk.

"Our analysis of the geotechnical conditions indicate that the soil and groundwater conditions in Harris County are similar to Washington, D.C.—and could potentially be even better for tunneling," said Brian Gettinger, an engineer with Freese and Nichols, the lead firm consulting on the project. "This is a key factor in the phase-one study as it validates that large-diameter, deep tunnels are constructable in Harris County."

The price tag for a 10-mile-long, 150-feet-deep tunnel would be between $1 billion and $1.5 billion for a 25-foot or 40-foot diameter, respectively, though some estimates reach as high as $2.3 billion, according to estimates compiled by the study.

The study also did not find any "non-negotiable" concerns for the project, said Scott Elmer, P.E., engineering division manager at Harris County Flood Control District, in a release.

"Geologic faults in Harris County may require special design and construction considerations if crossed by a tunnel, but it is not a fatal flaw," Elmer said.

The first phase of the study was funded by a $320,000 grant from the U.S. Economic Development Administration and an $80,000 match from the 2018 drainage bond. Another $2.5 million has been budgeted for studies that would further determine the cost of a flood tunnel, the amount of water it can move, and where the water will be transported to and from, among other details.