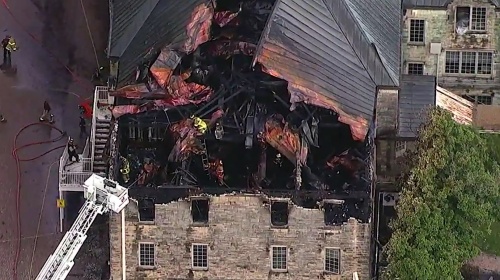 HOUSTON, Texas -- Investigators looked for answers Friday after a massive fire burned part of a structure belonging to St. Mark's United Methodist Church in The Heights.

The fire was reported before 2 p.m. in the 600 block of Pecore Street.

Houston Fire Department officials said there were three people inside when the fire broke out, but all were able to get out safely.

The education building's youth activity area appeared to be the origin of the fire, officials said.

The two-alarm call brought approximately 100 firefighters to the scene, some responded immediately after fighting an unrelated house fire.

The call at St. Mark's came a day before multiple calls for rescues following the floods from Imelda.

"You got to really be proud of these Houston firefighters. After 24 hours of doing rescues, now they have to respond to a two-alarm church fire and they were able to get to the location quickly, get into a good knockdown, no injuries, and everybody seemed to get out on time," Houston Fire Department Assistant Chief Ruy Lozano said.

While fire crews initially entered the burning structure, they were told to evacuate at one point due to the intensity of the flames.

"I think the most important thing we want people to understand is that our church is made up of people, and certainly we're grieving the impact on this building and we're thankful everyone is ok, but our church is more about who we are than the building itself," St. Mark's member Janet Allen said.

The structure was built in 1940, according to the St. Mark's United Methodist Church history.

Arson investigators remained at the church Friday afternoon, working to determine a cause of the fire.
SHARE THIS STORY