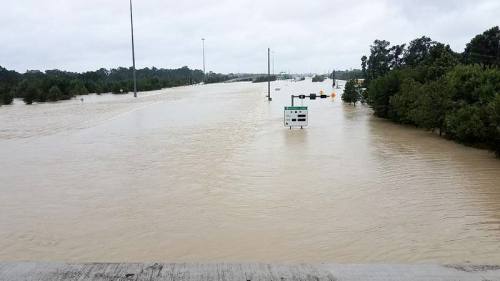 A record pool elevation of 53.1 feet was recorded on Lake Houston after Hurricane Harvey.

Nearly $95 million worth of capital improvement projects in Houston—such as community centers, libraries and fire stations—remain stalled while the city awaits reimbursement from the federal and state governments.

Each year, Houston City Council approves an updated version of the five-year Capital Improvement Plan, which is a “wishlist” of projects throughout the city that are funded with a combination of Houston Public Works, tax increment reinvestment zone and other funding sources. It also includes projects that do not yet have funding allocated.

For the second year in a row, Houston City Council voted July 10 to approve the plan without any indication of when the city would receive reimbursement funding and be able to move forward with the portion of the projects that were put on hold.

Immediately after Hurricane Harvey, HPW diverted $95 million worth of funds originally allocated to some CIP projects to make urgent repairs and renovations, according to HPW.

The city’s goal, Mayor Sylvester Turner said, is to secure 90% reimbursement for these diverted funds from the Federal Emergency Management Agency and 10% from the state of Texas. The reimbursement money will then be allocated to the specific list of delayed CIP projects, Turner said.

“I’m pleased that the FEMA reimbursement dollars will be returned to the projects from which they were pulled, as was promised,” said District C Council Member Ellen Cohen, whose district covers much of the Heights and Montrose. “I certainly share my constituents’ frustration at the delay and look forward to moving forward with these projects once we receive those funds.”

Ahead of this year’s July 10 vote, District E Council Member Dave Martin, whose district covers the frequently flooded Kingwood area, proposed an amendment that would require the city to split anticipated reimbursement funds evenly between each council district.

"Since we are using [Public Improvement Program] funds for Hurricane Harvey recovery projects, and that makes sense, when we receive the 90% reimbursement of these funds from FEMA, it makes sense to have equitable distribution of these funds and all council districts receive their fair share of dollars to fund necessary projects in every district across the city," Martin said in a statement after the meeting. "Our city is still recovering and those recovery projects should take priority over others until our city gets back on its feet.”

The amendment, however, failed to receive a majority vote from council members July 10, and Turner said he could not support the proposal because some council districts had costlier projects delayed by Harvey than others.

District K Council Member Martha Castex-Tatum, whose district covers parts of Southwest Houston, said a $17 million library project in her district was delayed due to Harvey. Turner said evenly splitting the funds would divert money away from it.

“You would be taking that $17 million from your project and dividing up among everyone else,” Turner said. “That’s the effect of his amendment.”