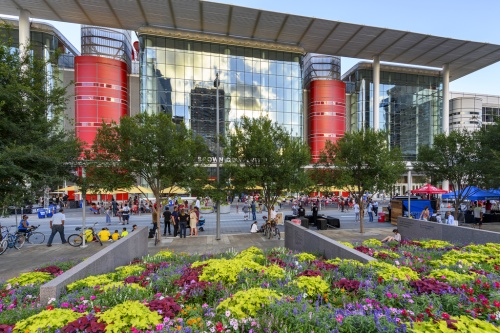 The George R. Brown Convention Center is part of the portfolio of Houston First, which receives a portion of the city's hotel occupancy tax.

Houston is the second city in Texas to work out a tax partnership with the online rental platform after the city of Plano entered a deal in May.

"We are happy to get this in place and do the right thing the right way," said Laura Spanjian, a senior public policy director for Airbnb and former director of sustainability for the city of Houston.

Governments can reach out to Airbnb to request an arrangement, but the company also identifies markets to work with, Spanjian said. Some 400 other local governments in the U.S. have a tax agreement in place, but in jurisdictions without the arrangement, individual hosts are supposed to calculate and file occupancy tax payments, Spanjian said.

A tax agreement with the state of Texas in 2017 generated over $15 million after the first year from the state's 6% hotel tax, according to Airbnb. The company does not have an agreement with Harris County, which assesses a 4% tax, half of which goes to the sports authority.

The city's 7% hotel tax funds go toward Houston First, the Greater Houston Convention and Visitors Bureau, and local arts and culture initiatives. Over $87 million in hotel taxes was collected in 2018, according to financial statements from Houston First, a local government corporation that manages the city's convention and performing arts facilities and promotes tourism.

“This additional revenue will further support Houston First’s mission to promote our city as a premier global destination and build partnerships to improve the quality of life of Houstonians,” Houston First President and CEO Brenda Bazan said in a release.

According to Airbnb, 285,000 guests rented units in Harris County in 2018, generating $44 million in income for the hosts.

"As one of the largest cities in the country, Houston is one of the biggest players," Spanjian said. "This is a win for everybody—the hosts, the city, arts and tourism."
SHARE THIS STORY