After fatal Heights accident, here is how Houston, METRO are addressing accessibility concerns 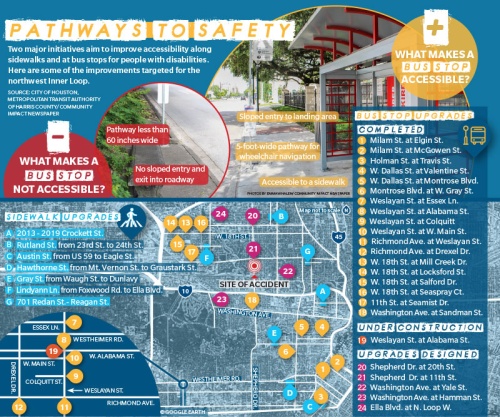 After a motorist struck and killed two people, including a man in a wheelchair, near Shepherd Drive and 10th Street in the Heights in March, accessibility improvement initiatives gained momentum and renewed longstanding concerns from local disability advocates.

“It’s very sad that all this happened because there was a tragedy, but I think it really brought an opportunity,” said Pancho Argüelles, director of local advocacy group Living Hope Wheelchair Association. “It’s a good initial response, but now I think the real challenge is in the continuity.”

Shortly after the collision, city officials announced a new intersection improvement project near the site of the accident, a new data-collection category for 311 calls related to accessibility issues, the creation of a new liaison between the city and accessibility advocates, and a plan to fast-track over 40 sidewalk improvement projects totaling $10 million by the end of 2019.

These announcements come on the heels of other sidewalk-improvement plans aimed at improving accessibility in Houston, including the Safer Streets Initiative, an ongoing citywide effort to identify and improve the city’s most dangerous intersections as well the Universal Accessibility Initiative, a METRO program that includes a commitment to ensure all 9,000 bus stops in the city are compliant with the Americans with Disabilities Act by 2024.

With 226 deaths, Houston had the highest rate of traffic fatalities in the state in 2017, according to the Texas Department of Transportation. In 2018, data from the Governors’ Association for Highway Safety showed Texas had the third-highest number of pedestrian fatalities in the country. However, it can be difficult to track the number of accidents that involve people with disabilities, said Maria Town, director of the Mayor’s Office for People With Disabilities.

“The majority of disabilities are not apparent, but they can impact a person’s experience crossing the street,” Town said. “If someone has epilepsy, a police offer is not going to know that.”

Prior to the creation of the new 311 call category, the only way for the Houston Public Works Department to track accessibility concerns was through a request process called a Pedestrian Accessibility Review, or PAR report.

City staff must visit residents voicing these concerns to evaluate the issue and verify that the person filing the complaint has a disability or is filing on behalf of someone with a disability, Town said.

“Previously, if a [concerned resident] wanted to report a sidewalk issue, there was nowhere for her to report that information and get it tracked to appropriate place within public works,” Town said.

From April to May, the month following a city-led press conference pledging safety improvements and announcing the creation of the new 311 call category, Public Works reported 677 calls for accessibility-related improvements. 90% have been addressed as of June 10, Turner said.

In that same period of time, the Mayor’s Office for Disabilities also collected 20 PAR reports, which is four times as many as the department typically receives in one month, Turner said June 10.

To commit $10 million for sidewalk improvements and $100,000 for upgrades at the Shepherd and 10th intersection, public works is reallocating funding from other projects that were stalled in fiscal year 2018-19, Public Works Director Carol Haddock said.

Improvements at 10th and Shepherd include the addition of a new crosswalk with a ramp and a new crossing signal adapted for people with disabilities.

“Some requests involve the timing of lights and crosswalk signals,” Town said. “For someone with a disability, it might take them longer to cross the street.”

Aiming to complete all projects by the end of 2019 is a welcome, if ambitious effort, which will require follow-up, Town said.

“The lack of quality sidewalks across Houston is a longstanding issue,” Town said. “It’s going to take a group of motivated people to make it happen.”

METRO pledged $35 million for the Universal Accessibility Initiative in its fiscal year 2019-20 budget beginning in October and received a $30 million financial commitment from the Houston Galveston-Area Council. If the agency’s 20-year, $7.5 billion strategic plan, METRONext, is approved by voters in November, the accessibility initiative will gain another $70 million boost, said Roberto Treviño, METRO’s executive vice president for special projects.

“[Universal Accessibility] is the agency’s No. 1 priority,” Treviño said. “That’s going to hold steady, and if there’s any belt-tightening that has to happen, that’s going to happen in other areas of the agency.”

A long road ahead

As initiatives throughout Houston take shape, Town and Argüelles said coordination between government agencies and input from disability advocates will be key to their success.

“[Standard METRO buses] are not really safe for me because they do not always know how to tie you in properly in the wheelchair,” Cedillo said through a translator. “In one instance, I fell forward because I was tied improperly.”

Argülles said he has been involved with the METROLift service—which provides transportation for people with disabilities—but was not approached about the Universal Accessibility Initiative.

“It is very different to ask for feedback on something that is already cooked than to ask for input for somebody who is going to be designing it,” Argüelles said.

METRO’s initiative was already in the works before the collision occurred, and the agency will now begin a process of engaging with stakeholders, including groups such as the city’s office for people with disabilities, Treviño said.

“A city that puts people on the moon has to be able to come up with solutions faster,” Argüelles said.

Editor's note: this post has been updated to reflect new data and initiatives released by the city of Houston June 10.
SHARE THIS STORY