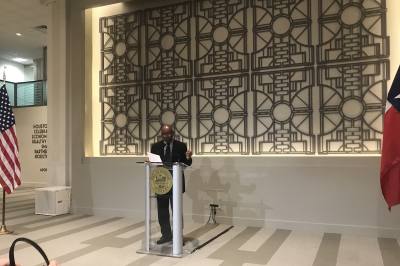 Mayor Sylvester Turner spoke at a press conference regarding Proposition B on May 3.

Mediator David Mattheisen declared an impasse May 3 between the Houston Professional Firefighters Association and the city of Houston along with the Houston Police Officers Union after the parties failed to agree on a deal that would avoid 220 Houston firefighter layoffs to fund raises for the rest.

The parties were tasked with finding a way to implement 29% pay raises for Houston firefighters as mandated by voter-approved Proposition B, an ordinance that requires firefighters' salaries match police officers of commensurate rank.

"The city cannot go beyond what we have done without bankrupting the city," Mayor Sylvester Turner said. "If the city were to do what the firefighters union is asking us to do with no layoffs and no funding source, this city would be bankrupt, and the credit rating agencies, Fitch, Moody and S&P, would hit us hard, and everyone in this city would pay the price."

At a May 3 press conference, Turner revealed new details in the city's ultimate proposal to the HPFFA, which included pay raises for firefighters phased in over 3 1/2 years, no layoffs of firefighters or cadets, no specific education requirements for raises and no demotions within the fire department. To distribute the raises, the fire department would receive a block grant over the next 3 1/2 years that would not exceed $307 million by the end of that period. It would be at the union's discretion to determine how to distribute raises by rank, the proposal states.

HPFFA President Marty Lancton said in a separate press conference May 3 that he cannot take the offer for a vote among the union's members without further detail.

"The numbers don’t explain to these members what it is they’re supposed to be voting on," Lancton said.

In a proposal sent on the morning of May 3 following the end of the mediation meeting May 2, the HPFFA asked for a four-year phase-in plan with a specific set of requests, including specification of how raises should be distributed by rank. It also included a new request that the city "drop its demand that the proposition is rescinded and declared unconstitutional," the document states. The document does not provide suggested allocation amounts for the raises by rank.

Turner said the HPFFA cannot "continue to move the goal post" and that the request to maintain Proposition B in perpetuity is not good for the city. Lancton said it is not either party's responsibility to go against the will of the voters.

Both parties are awaiting a ruling from a judge overseeing a lawsuit filed by the city and the Houston Police Officers Union alleging Proposition B is unconstitutional under state law.

“I don’t think it’s in my or the mayor’s right or authority to tell the voters that he’s smarter than them,” Lancton said, referring to the lawsuit.

Turner said dropping the suit is not in the city's best interest.

"It is clear at this point that it is now up to the courts to make a decision about the validity of Proposition B, which has created a great deal of confusion, division and dissension within this city," Turner said. "Proposition B is not good for anyone before, now or at any time in the future."

Checks for pay raises will be cut May 10, Turner said. If Proposition B is invalidated after the checks are cut and the ruling is not appealed by the HPFFA, Alan Bernstein, the communications director for the mayor, said he could not confirm if the city would ask the fire department to return the money previously given out for the raises.