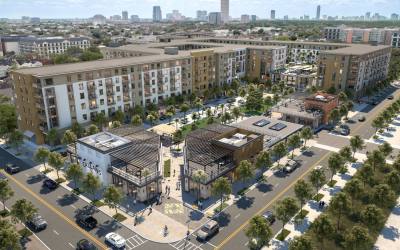 Regent Square Phase 2 is set to break ground this fall.

New plans for GID Development Group’s Regent Square, a mixed-use project near Buffalo Bayou Park between River Oaks and Montrose, was unveiled to brokers May 9 as leasing became available for Phase 2. Groundbreaking on the site is planned for this fall.

“Our goal for Regent Square is the creation of an exemplary, urban mixed-use district in the heart of Houston. Phase 2, the core of the masterplan, is poised to establish the project as a dynamic, walkable place as it weaves high quality restaurants, retail and residential into the fabric of the surrounding neighborhoods,” GID Development Group President James Linsley said in a statement.

The mixed-use district will eventually encompass 24 acres along West Dallas Street, with Phase 2 occupying 8 acres at the southwest corner of West Dallas and Dunlavy streets. For future phases, GID owns an adjacent lot fronting Allen Parkway as well as a lot to the east occupied by the Allen House Apartments. The district’s first phase, The Sovereign at Regent Square, a 21-story residential tower, was completed in 2015.
SHARE THIS STORY

“It's so important for us to do everything we can to hold on to as much of that history and not lose it because it defines in large part who we are as a city, we have lost a lot but we have not lost it all,” Mayor Sylvester Turner said.

The new venture will offer craft cocktails and late night eats, while a bar area will boast a one-of-a-kind antique bar and a baby grand piano.