Between 2016-18, the entity in charge of over $230 million in both private funds and funds from Houston’s hotel-occupancy tax at times followed a haphazard approach lacking transparency, an independent audit released Feb. 18 found.

"The integrity of the procurement process matters," said Houston City Controller Chris B. Brown in news release accompanying the report. "It's important that the city, its departments, and all its component units are conducting their procurement processes in a consistent, transparent manner.”

The audit, ordered by Brown and facilitated by advisory firm Stinnett & Associates, focused on the Houston First Corp., a local government corporation tasked with operating city-owned convention and entertainment facilities such as the George R. Brown Convention Center and the Wortham Center for the Performing Arts.

Among key findings were repeat examples of records of orders being logged after contracts were signed and work on the associated project had already begun. This issue happened at least 20 times between 2016 and 2018, the report stated. The report recommended more proactive record keeping.

In one instance, a $400,000 parking technology contract was awarded to a vendor without going through a formal bidding process, despite official policy requiring the entity to do so for any purchases over $50,000, the audit found.
RELATED STORIES

Q&A: Houston chef Chris Shepherd on how to support the local restaurant industry

“The process utilized for the parking guidance system selection made by the former Chief Operating Officer and approved by the former President, should have been documented more clearly,” Houston First CFO Frank Wilson in the agency's audit response.

Another $740,000 contract awarded for work on the Avenida Plaza at the convention center was approved using a inadequate procurement process typically reserved for much smaller-scale projects, according to the report.

Wilson said the alternative process was still legally sound and was needed, “due to the necessity of completing the Avenida project before the 2017 Super Bowl and the size and complexity of the reconstruction.”

Concerns with transparency also arose in the audit which noted that nine bids awarded during the two years studied were approved without any documented explanation of why a particular vendor was chosen over another.

In response, Houston First management cited errors in record keeping rather than the entity’s established procedures. The corporation did, however, state in its response that it implemented a uniform scoring matrix Jan. 17.

“Management stated each selection committee is responsible for documenting their selection process, and that some of the supporting documents requested could not be readily located due to several office relocations in the past five years,” the report stated.

Each finding in the audit is accompanied with a recommendation and a management response from Houston First. The Controller’s office stated approval of most of the corporation’s responses.

“The good news is that Houston First has taken significant steps forward in addressing many of these issues over the course of the past year," said Brown in a statement accompanying the report. "The Controller's Office stands ready to assist HFC in the implementation of any of the recommendations made in our audit."

Over 300 of Houston’s first responders under quarantine for coronavirus

In addition to those, 11 police officers and 7 firefighters have tested positive for COVID-19. 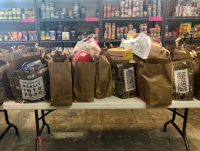 How to help: 11 organizations and initiatives needing support in Houston as coronavirus affects the most vulnerable

The coronavirus pandemic has presented challenges to nonprofits, especially those helping vulnerable populations and those with health concerns.

As of March 26, the end of the first week that most major test centers were open, the City of Houston had tested 1,062 patients at its site and Harris County tested 1,700 patients across its two sites.