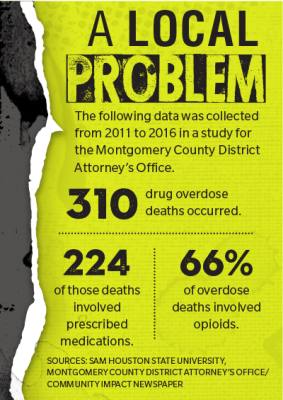 In 2016, the opioid epidemic claimed nearly 40,000 lives in the United States, according to the Centers for Disease Control and Prevention; 1,500 of those deaths occurred in Texas, according to the Texas Department of State and Health Services.

According to a countywide study completed earlier this year by Ling Ren, Sam Houston State University criminal justice professor, for the Montgomery County District Attorney’s Office, Montgomery County had the third-highest average prescription drug mortality rate among Texas’ 10 most populous counties and the second-highest average prescribing rate from 2011 to 2015.

According to the study, Montgomery County also experienced 310 drug overdose deaths from 2012 to 2016, 224 of which involved a prescribed controlled substance, making prescription drug overdose the second-leading cause of death in the county, just behind fatal traffic crashes.

“As a county, we are experiencing [opioid abuse],” said state Rep. Mark Keough, R-The Woodlands. “This is a huge concern for us—people are dying.”

In response, local law enforcement and health care professionals are working together to make opioids harder to get, while making recovery resources  more accessible.

In the late 1990s, pharmaceutical companies began marketing prescription opioid pain relievers as drugs that were no longer as addictive as had been previously thought, according to the National Institute on Drug Abuse.

As a result, these drugs, which had formerly only been prescribed to treat acute, short-term pain, became the prescription of choice to treat chronic, long-term pain.

“Medications can be  good when used appropriately, but this particular class is very potent and the belief now is that they’ve been overused and overprescribed for far too many different conditions, where a less addictive medication could have worked,” Fehery said.

“There has been a shift from historically illicit drugs to the abuse of prescription pain medications,” Conroe ISD Police Sgt. Matt Blakelock said. “Opioids seem to be appealing because of the easy access kids have by finding them in the medicine cabinets of family and friends. Opioid-based narcotics are not all that common [in CISD] but do show up from time to time in the form of prescription medications.”

Fehery said that roughly 50 percent of those who use opioids inappropriately get them from a friend or family member who had been prescribed to use them by a doctor. However, Tamara Holland, Montgomery County assistant district attorney, said in some cases, physicians can also be at fault.

“Sometimes, the doctors are to blame,” Holland said. “There are just some unscrupulous doctors who want to treat the pain itself rather than the underlying cause.  I think those doctors are probably few, but the ones that are doing it are making a huge impact.”

In May, the Texas Health and Human Services Commission received $27.4 million in federal funds to prevent and treat opioid dependence. The money will help 14,000 people over two years by expanding access to and capacity at treatment centers, increasing prescriber training and enhancing recovery services, HHSC officials said.

With the results of Ren’s study, Holland said the county is applying for grants to hire personnel to focus solely on identifying so-called pill mills— doctors, clinics or pharmacies that prescribe or dispense opioids inappropriately—as well as doctor shoppers, or patients who visit multiple physicians seeking opioid painkillers.

With the passage of HB 2561 on June 9, the 85th Texas Legislature made it mandatory for Texas-licensed pharmacies to report  dispensed controlled substances records to the program by the next business day after the prescription is filled, effective Sept. 1, 2017. The requirement previously allowed for seven days to send information, according to the Texas State Board of Pharmacy.

“I would like to see us hold those doctors accountable for checking on these patients’ histories before prescribing them opioids,” Holland said.

“In our clients, we’ve seen opioids trending down and heroin becoming more popular because of the cost,” Hilliard said. “One prescription opioid pill, such as Vicodin, can cost $9 and users can go through several in a day, whereas a gram of heroin can go for $40 and last five days. It’s a savings to them.”

On the health care side, Fehery said he believes hospitals are becoming stricter on the prescription of opioid painkillers and are considering alternative pain management options.

“There are still situations where opioids are necessary, but everyone is having to look closer at the doses and the duration,” Fehery said. “No hospital wants to perpetuate this or set someone up for dependency if they can help it.”

“Drug abuse is a serious public health issue that impacts nearly every community and family in some way,” Blakelock said. “Through continued drug safety and awareness presentations, proactive responses and detection efforts, we work to maintain a safe learning environment for every student, every day.”

“At PaRC, we treat chronic pain and addiction simultaneously,” Fehery said. “We combine traditional behavioral therapies while also introducing patients to alternative pain management techniques because continuing to use opioids is not an effective strategy.”

With more treatment options available and government and health care entities working to prevent addiction, officials are hoping to begin reversing the opioid epidemic trend in the area.

“Addiction is a disease—it doesn’t mean you’re a bad person, it just means that your brain is wired differently,” Fehery said. “Dependency is a precursor and can lead to addiction, so it’s always best to intervene early. If you think there might be a problem, talk to your physician about it. There’s a lot of resources available out there—you don’t have to do it alone.”