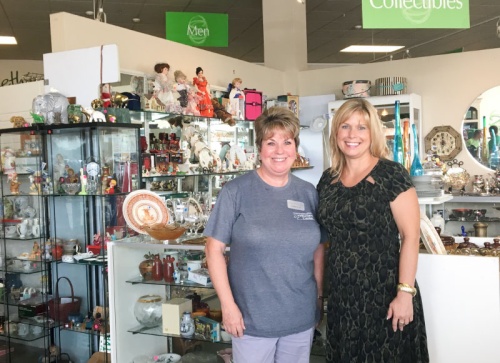 Debbie Flint (left) is the store manager of Something Special, while Sarah Raleigh (right) serves as the president and CEO of MCWC.

For more than 35 years, the Montgomery County Women’s Center has been helping victims of domestic and sexual violence find refuge and begin new lives, with financial support through a local resale shop.

Formerly known as Rags to Riches, Something Special moved to its current location in Shenandoah and debuted a new name in 2009. The resale shop was previously split between two locations—one on Budde Road and the other on I-45—before consolidating into one larger space.

The store accepts a variety of donated items from the community, ranging from clothing and children’s toys to household items and furniture, all of which benefit MCWC.

“Something Special is a private nonprofit, and everything that is donated to us is either used for the clients in the MCWC shelter or transitional housing, or it’s sold here and 100 percent of those dollars go back to support the center’s programs,” Something Special Manager Debbie Flint said.

MCWC was first opened as a satellite campus of the Houston Area Women’s Center. However, less than two years after the satellite campus was opened, President and CEO Sarah Raleigh said the need for services in Montgomery County was so great, the center quickly transitioned from a satellite campus to its own, independent entity.

“Our shelter is regularly at capacity, so the need for our services is outpacing what we’re able to provide in our area, by far,” Raleigh said.

Having worked for the nonprofit for the last decade, Raleigh said she continues to see increasing domestic and sexual violence in Montgomery County, with more young women seeking help from the shelter.

“About 50 percent of our calls are from young women under the age of 18, and we continue to see that escalate year over year,” she said. “We’re also seeing more significant injuries and more intense trauma. This is the biggest growth year we’ve ever seen, and I think part of that has to do with the ‘Me Too’ movement.”

According to MCWC’s records, from Jan. 1-June 30, the crisis hotline has already logged 29,291 calls this year.

Raleigh said clients typically stay in the shelter for 30 days, while they can stay for up to two years in transitional housing. However, she said the time frames vary on a case-by-case basis. Clients can also receive individual counseling for up to six months, while they can participate in group counseling as long as necessary.

Because many clients only come to the shelter with the clothes on their backs, Raleigh said when clients move from transitional housing into permanent housing, they are able to take all of the donated items used to furnish their transitional housing with them to begin their new lives.

Raleigh said that despite its name, more than 50 percent of MCWC clients come from Harris County, and the center has also provided services to men.

“Although our employees and volunteers are predominately female, you’ll find that we have a lot of male employees, volunteers, counselors and interns,” she said. “We think it’s really important that people who have been through a violent relationship understand that it’s not the gender—it’s the person. So it’s really important, especially for the kids, to be exposed to a positive male role model.”

Raleigh said without the generosity of the community and the dedication of volunteers on a daily basis at Something Special, MCWC would not be able to continue meeting the growing needs of Montgomery County.