Let Him Handle It lightens financial burden for cancer patients 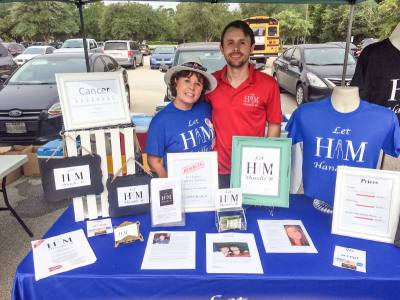 Donna Smith (left) and her son Derrick (right) founded Let Him Handle It in 2017 to help cover medical bills for cancer patients in need.

In 2015, The Woodlands resident Donna Smith underwent an annual mammogram and upon completing her appointment, she told the medical staff she would see them the following year.  However, shortly after, on her 33rd wedding anniversary, Smith was told she had breast cancer.

“Needless to say, it broke our hearts,” Smith said. “But the hardest part for me was telling my son, Derrick—that was the first time I shed a tear. He seemed to be holding up well, but I later found out that when he got home, my son was feeling so much anxiety, he decided to get on his knees and pray. He decided to let [God] handle it.”

Two years later, after several biopsies, oncology visits and surgeries as well as 22 rounds of radiation, Smith said she is now cancer-free. Inspired by her son’s faith, the two decided to find a way to use their family’s experience to give back to the community.

“What we didn’t realize was how big of a medical expense it was going to be,” Smith said. “I have wonderful insurance, but what a lot of people don’t know is that the doctors and lab workers behind the scenes aren’t necessarily in-network. So while I was trying to heal, the anxiety from all these bills piling up was taking its toll—we ended up spending tens of thousands of dollars out of pocket.”

To lighten this burden on other cancer patients, Smith and her son founded Let Him Handle It in mid-2017. The organization raises funds to contribute toward medical bills for those in need.

“God put us in a position to be able to pay those medical bills, but what about the families that aren’t able to?” Smith said. “What about the families who are making a choice to pay for their medication instead of a house payment or to get their mammogram instead of paying their car note? I know too many people who have had to go bankrupt trying to pay their medical bills.”

Still relatively new, Let Him Handle It raises money through individual donations and corporate sponsorships, which can be one-time or monthly donations of any amount, Smith said. The nonprofit also sells T-shirts, frames and wall plaques online and every Saturday at The Woodlands Farmer’s Market at Grogan’s Mill.

Smith said she is working on new items to add to the organization’s repertoire, including ornaments for the holiday season.

With a background in health care, Smith said she identifies individuals and families in Montgomery and North Harris counties who are eligible for assistance by confirming the patient’s cancer diagnoses and assessing their financial needs.

“I know there’s a lot of emphasis put on breast cancer, and I’m so blessed that there is, but I don’t want to say ‘no’ to anyone just because they have a different type of cancer,” Smith said. “So we’re open to all types of cancer. I don’t discriminate at all, because I’ve been on the caregiver side and I’ve seen all shapes and sizes of cancer—cancer is a scary word.”

Looking to 2018, Smith said she hopes the organization will have at least five major corporate sponsors and will add 10 new sponsors each month in 2018. She is also already planning fundraising events for the nonprofit next year, including a TopGolf event in Spring, which will take place next summer.

In addition to increasing the contributions Let Him Handle is able to make to each patient, Smith said she would also be open to expanding the organization’s coverage area beyond Montgomery and North Harris counties.

“It’s all about being there for those who need it the most, and that’s what I’m doing,” Smith said. “Some people get called to preach—I feel that this is my calling. God was able to put me in a situation where I could pay for my medical bills, [so] I need to pay it forward.”