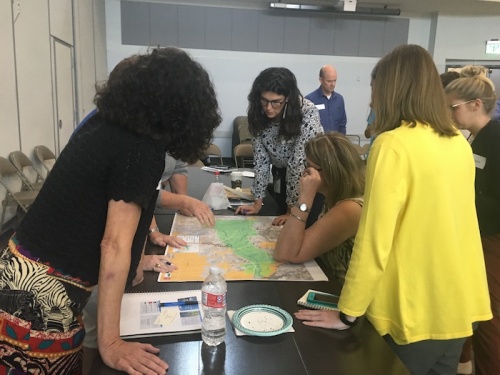 The first meeting of the Cypress Creek Watershed Partnership was held July 23 in Cypress.

A new partnership in the Houston area has formed with the goal of improving water quality levels along Cypress Creek, including fecal matter levels that officials said exceed state standards for waterways used for recreational purposes.

The group—called the Cypress Creek Watershed Partnership—is being launched as a collaborative effort between the Houston-Galveston Area Council and the Texas Commission on Environmental Quality, but officials said the actions taken to improve water quality will be largely influenced by local stakeholder input. Two initial meetings were held July 23 in Cy-Fair and Spring, where H-GAC Senior Planner Justin Bower provided an overview of the group's mission.

Bower said both natural and man-made sources have contributed to the creek's issues. If left unaddressed, he said water quality would likely deteriorate further as the area becomes more developed, which would have negative effects on public health, the environment and the local economy.

"We’ll never get to a situation where we have no bacteria, but what we’re really trying to do is mitigate the risk to our communities," Bower said. "This is something that can grow to be a public health impact."

Waterways are categorized by the TCEQ based on their uses—including recreational, aquatic life and drinking water—and each use has a different metric to determine whether the waterway is suitable for that use, Bower said. In waterways used for recreational purposes, for example, the state gauges E. coli levels. If levels pass a certain point, as they have on Cypress Creek, the waterway is considered "impaired."

Cypress Creek was determined to be impaired based on preliminary data compiled by the TCEQ between 2009-16, Bower said. Data is gathered quarterly at 11 monitoring stations along the creek, he said.

"We haven't seen a dramatic increase, which is a good thing, but the numbers are still traveling in the wrong direction,” he said.

Bower emphasized the water quality issues are not related to drinking water but strictly to recreational uses. He also said the risks of pathogen exposure are worthy of attention, but not to the point that would require immediate intervention or shutting down access to the creeks.

When it comes to using the creek, Bower said to minimize direct contact with the water and to use common sense, such as not ingesting water and not swimming with open cuts.

Moving forward, Bower said the H-GAC will continue to monitor the data while working with stakeholders through the CCWP to identify challenges and come up with solutions. By the end of 2020, the partnership will develop a Watershed Protection Plan that would serve as a roadmap, identifying the sources of the issues and laying out the solutions, timelines and resources.

All efforts will be voluntary—as opposed to enforced with mandates or regulations—and stakeholders can include anyone with an interest in the creek who wants to get involved, Bower said.

The next meeting of the CCWP is slated for later this summer, but a date has not yet been determined.