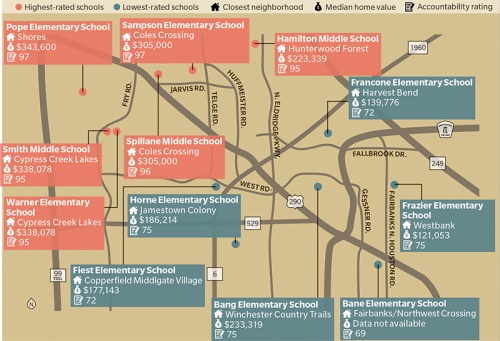 According to a 2019 study published by Paige Martin of Keller Williams Realty, homes zoned to the top-performing schools in the Houston area tend to be more expensive.

Community Impact Newspaper conducted an independent study comparing Cy-Fair ISD schools’ 2017-18 accountability ratings from the Texas Education Agency to the median appraised value of homes in these campuses’ immediate neighborhoods from the Houston Association of Realtors.

According to Cypress-based Realtor Amy Lippincott, homes ranging from $200,000-$299,999 are in higher demand than any other price range in Cy-Fair, and buyers will be hard-pressed to find new homes with large yards near top-ranked schools for this price.

“They don’t stay on the market,” she said. “[Especially] in a newer neighborhood that doesn’t flood—there’s very little in that price range, and it’s really hard to find a good house.”

This article is a part of a series on real estate trends in the Cy-Fair area. View more trends here and stay tuned for more trends to be added throughout July.