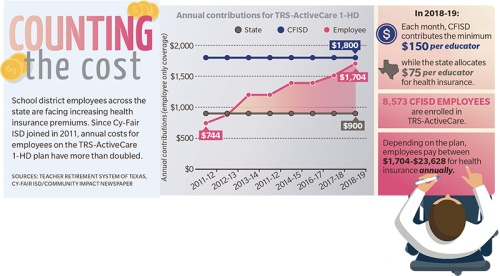 Cy-Fair ISD is losing employees over the affordability of health care plans as insurance premiums continue to increase, Superintendent Mark Henry said. District officials said they are hoping the state will remedy the issue during the upcoming legislative session in 2019.

In October, when the CFISD board of trustees unanimously adopted its priorities for the 86th Texas Legislature, which will begin Jan. 8, one of the priorities involved lobbying for the state to provide more funding for TRS-ActiveCare. The statewide health insurance plan provides coverage for about 486,000 individuals, including 8,573 people at CFISD, according to the Teacher Retirement System of Texas.

The teacher turnover rate has been about 12-13 percent each year since 2011, but officials said they are increasingly hearing teachers grumble about health care expenses.

“[Employees] love the district … but we have a hard time holding on to some employees because of health care,” Henry said at an Oct. 8 board meeting. “That’s become our biggest crisis when it comes to retaining quality people.”

TRS-ActiveCare was established by the Texas Legislature in 2001 to offer affordable health insurance to small districts that had few options, Snow said. Districts with fewer than 500 employees were required to participate, but participation is not mandatory for larger districts, he said.

“We know that some districts contribute more [than required],” Daniel said. “But the statutorily required contributions haven’t changed. Programmatically, the [TRS] board structures the program, structures the benefits, and every year the board makes adjustments to the premiums and the plan design.”

CFISD was self-insured before joining TRS-ActiveCare, and Snow said expenses increased by 107 percent from the 2004-05 school year to the 2010-11 school year. During that time the district had not increased health insurance premiums for employees, so the self-insured health fund had a $12 million deficit and was being subsidized by the general operating fund.

CFISD joined TRS-ActiveCare in a year when the district was overcoming budget cuts and facing major deficits, Snow said. He said the move saved the district $20 million and more than 400 employees’ jobs. The TRS plans also offered more flexibility and larger physician and facility networks, which he said was another benefit for employees.

“For school districts, the benefits are that health care risk is transferred to the state, and health care plan benefit design and premiums are determined by TRS, taking the districts out of the insurance business,” Snow said.

However, plan premiums, deductibles and maximum out-of-pocket costs have continually increased since the establishment of TRS-ActiveCare, according to district data.

Full-time and part-time CFISD employees are eligible for TRS-ActiveCare, including substitutes who work at least 10 hours a week. Those who do not take advantage of the plan must obtain health insurance from the marketplace or a spouse’s employer, Snow said.

Although enrollment is still optional for districts of a certain size, they cannot opt out once they have joined the plan. Daniel said this policy is due to a phenomenon known as adverse selection.

“If you only have the least healthy or the most-costly areas of the state participating in the plan, then the costs exceed what you can really support, so you want to have a mixture,” she said. “If we allow districts to come and go from ActiveCare, then the lowest-cost or healthiest districts would leave the plan, leaving higher cost, higher-risk districts in the plan, driving up costs.”

Snow said if this were not the case, the district’s decision whether to opt out would depend on the alternative options employees would have as well as the cost to employees and the district. With TRS-ActiveCare, health insurance contributions cost the district $28.5 million each year.

“Because TRS-ActiveCare is a large pool of district participants, it has the advantage of the cost-benefit of plan design and premiums,” he said. “If districts were allowed to discontinue participation in the plan, particularly large districts that are currently participating, it would significantly harm the viability of the program.”

Jennifer Hudson, a paraeducator at a CFISD high school, said she has been on TRS-ActiveCare 1-HD for the last five years, and costs have steadily increased each year. She and her husband, who also works for the district, spend about 20 percent of their household income on health care, she said.

By the end of November, Hudson said her family had paid more than $18,000 out of pocket for health care in 2018—including insurance premiums, routine physician visits and prescriptions.

“Other options are just as expensive, but if we’re with TRS, you would think it would be so much less because it’s such a huge group of people,” she said.

While TRS-ActiveCare 1-HD—a Preferred Provider Organization plan—generally allows for flexibility in health care options, Hudson said the high deductible means without major illnesses or procedures, teachers are paying for more health services out of pocket. This plan’s deductible ranges from $2,750 for an employee in network to $11,000 for a family out of network.

“Without a catastrophic injury, [the plan] never kicks in,” she said. “I’ve never had anything hit the deductible and not have something come out of pocket. I’ve had to pay for everything.”

TRS ActiveCare Select, which is similar to a Health Maintenance Organization plan, allows users to see providers within the plan network without a referral and offers lower deductibles but with higher monthly premiums.

TRS-ActiveCare 2—the only remaining traditional Preferred Provider Organization plan—is not available for new enrollees as of Sept. 1. As a result, the high-deductible plan is often the most affordable option for employees, Hudson said. She said she hopes to see cost reduction and reform at the state level.

“It’s a great job, and Cy-Fair’s a great place to work,” Hudson said. “I just would really like TRS to do more for the teachers when it comes to insurance. That, honestly, is the biggest complaint [from] teachers.”

About half of all CFISD employees participate in TRS-ActiveCare, and the district has not contributed more than is required since joining the program. With limited revenue resources, officials said they have elected to provide salary increases for all 17,000 employees rather than increased health insurance contributions that do not benefit all.

Officials said salary increases more than offset increases in health insurance premiums. CFISD budgeted to increase teacher salaries by 3 percent in 2018-19, which translates to an additional $1,590 in annual pay for second-year teachers. Meanwhile, costs for employee-only coverage on the TRS-ActiveCare 1-HD plan rose by $192 year over year.

Monty Exter, a lobbyist with the Association of Texas Professional Educators, said teachers statewide expect to have access to a quality health care plan. However, in some cases they actually make less money year over year as health care premiums rise at a higher rate than salary increases, he said.

“Teacher turnover—whether it is due to salary issues, nonsalary compensation issues, preparation issues, accountability frustration issues—it’s not good for students,” he said. “It’s also expensive. We spend a ton due to teacher turnover because of all the training, mentoring and programs put in place to get teachers up to speed—not to mention all the money associated with recruitment.”

Daniel said while the state has not increased its $900 annual contribution, the TRS has worked to create systems that focus on keeping patients healthy to achieve better outcomes and keep costs manageable.

“If you can improve quality, that can often help you contain your costs better,” she said. “And we have wellness initiatives too. We try to encourage healthier behaviors so that when people are healthier our costs are lower as well.”

Other initiatives include disease management, case management, precertification of costly procedures, prior authorization for high-cost drugs and telemedicine services such as Teledoc, Daniel said.

While several large districts—including Austin and Houston ISDs—are not part of TRS-ActiveCare, Exter said the program is still a benefit for most midsized and small districts.

“They don’t have a number of employees that would allow them to get anywhere near the purchasing power that ActiveCare gets when you’re bundling hundreds of thousands of lives together,” he said. “That creates stability.”

CFISD, the third-largest district in the state, is one of many districts and educator groups, including the ATPE, lobbying for the state to improve the affordability of TRS-ActiveCare in the future.

Daniel said action taken in 2019 would likely depend on the legislation for which school districts advocate. Approaches in the past have included bills targeting a single district or districts of a certain size. No notable TRS-ActiveCare bills have been filed as of press time.

Experts said the upcoming legislative session would include discussion on TRS-ActiveCare and TRS-Care, the benefits program for more than 250,000 retired educators and their families.