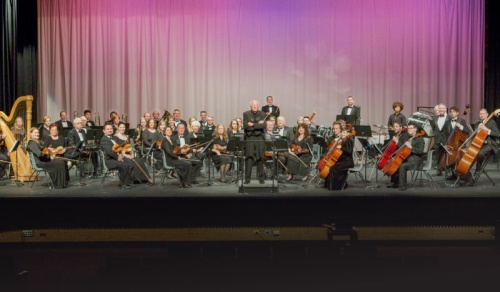 The city of Conroe did not vote on the study for the performing arts venue during its Feb. 15 city council meeting. The motion died for lack of a second. City Administrator Paul Virgadamo said council members will instead consider the proposal during its March 8 meeting.

As community involvement in the arts continues to grow, Conroe city officials and other stakeholders are making plans to build new performing arts venues to support local artists and organizations.

Best known for two performance venues—the Crighton and Owen theatres—the city of Conroe has started to discuss construction of a large performing arts venue to accommodate growing demand for live entertainment in the region.

Spirit of Texas Bank also has plans to build an estimated 1,500- to 2,000-seat performance arts venue—The Yellow Rose Theatre—in Conroe at the Spirit of Texas Plaza in 2019.

Annette Spikes, president of the Greater Conroe Arts Alliance, said a state-of-the-art performance venue has long been needed in Conroe. The GCAA comprises various arts groups in the area, such as the Conroe Symphony Orchestra, Conroe Art League and Montgomery County Choral Society.

“It has been a long time coming,” Spikes said. “We will have an opportunity to draw more people to Conroe if we offer a full schedule of entertainment year-round. It is exciting that the city is finally stepping
up and looking at the possibilities.”

Conroe has a community of artists, musicians and organizations in need of larger performance venues to complement the 525-seat Crighton Theatre, the 250-seat Owen Theatre and the nearby 6,500-seat Cynthia Woods Mitchell Pavilion in The Woodlands, Spikes said.

Community staples like the Conroe Symphony Orchestra do not have enough space at the city’s largest venue—the Crighton Theatre—to stage a performance by the entire orchestra at one time, Spikes said.

“I have worked with the Conroe Symphony for going on 20 years, and every season it is very difficult to know whether or not we have a place to perform,” Spikes said. “We normally have 800 to 1,000 people attend the concerts, and currently Conroe ISD has been generous and let us use the auditorium in Conroe High School for the last three or four seasons. It is the only place large enough where we can have a concert.”

The city’s proposed performance arts venue and the The Yellow Rose Theatre in Conroe are expected to accommodate the need for larger performance stages and seating, Conroe Mayor Toby Powell said.

On Jan. 11, Conroe City Council members approved a resolution identifying potential funding sources for the city project. The council is also considering a feasibility study proposal on Feb. 15­—after press time—from Garfield Public/Private LLC to identify the cost, location, size and scope of the project.

While details on the project will not be available until after the study, Powell said the city is considering a project similar to the Smart Financial Centre in Sugar Land, which opened Jan. 14, 2017. The $84 million facility has 6,400 seats.

Meanwhile, Spirit of Texas Bank plans to build The Yellow Rose Theatre in 2019 at the Spirit of Texas Plaza on Hwy. 105 in downtown Conroe. The facility will seat between 1,500 and 2,000 visitors.

Marsha Porter, a former Conroe council member who is working as a liaison between the city and community arts groups, said arts venues of this magnitude could attract new restaurants and stores to the surrounding area.

“I think it would make a big difference in our economy,” Porter said. “Smart Financial has 260,000 visitors a year; they brought in $26 million a year into their community. These are people filling up with gas, eating at the establishments, and I think it would promote secondary development opportunities around wherever we put the venue.”

Dean Bass, Spirit of Texas Bank CEO, said The Yellow Rose Theatre is the next step in a larger plan to revitalize the area surrounding the Spirit of Texas Plaza—which had previously remained undeveloped because it was a swampy tract of land.

The property is adjacent to the Conroe Flag Park and the future Montgomery County Veteran’s War Memorial park that is under development by the Veteran’s Memorial Commission. A new road will be built to connect the property to FM 2854. Bass said there are plans for a multistory hotel and conference center and a couple of new restaurants as well—although he added those plans are in preliminary stages.

“We hope someone could eventually come here and stay at a hotel out behind us, experience The Yellow Rose Theatre, walk the flag park and be within walking distance to the Owen and the Crighton [theatres],” Bass said.

Bass said the FM 2854 connector project, which is being built by a partnership between the city of Conroe, Montgomery County and Spirit of Texas Bank, is a major component of planned development. The $1.5 million project is expected to break ground in early summer.

The venue proposals come at a time when the city is committing resources to support the arts, entertainment and music. On Feb. 15—after press time—the city considered  about $112,000 in hotel occupancy tax grants to promote local events and festivals and $100,000 in grants for the Arts and Cultural Development Grant Program.

Conroe Communications Coordinator Victoria Ensley said the city is also working on an application to receive a cultural district designation by the Texas Commission on the Arts. The application will be submitted in June.

“I was kind of surprised that a lot of cities have been turned down for this particular designation,” Ensley said. “I was shocked at how tough a process this actually is.”

Furthermore, Ensley and Shannon Overby, director of the Conroe Convention and Visitors Bureau, said they plan to apply for a Music Friendly Community designation from the governor’s office.

“It is very much an art and culture community,” Overby said. “Downtown is great. We have a lot going on, and these designations will pull it all together.”

Ensley said the cultural district designation opens up opportunities for different grants to help promote the area as an arts district that the city does not qualify for without the designation.

“We have so many arts groups, so many galleries, so many musicians,  so many poets, the theaters and new theaters coming in the future,” Ensley said. “This would give us that much more credibility to say, ‘Yes, we are already a hub of arts and cultural significance.’”