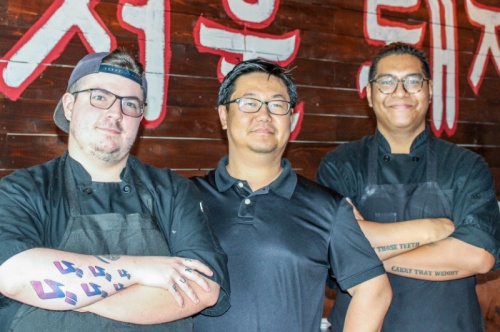 Owner Danny Kim (center) is flanked by his cooks, Kevin Simmons (left) and James Romero. Kim opened Seoul Pig a year ago when he recognized an opportunity for Korean barbecue in Pearland.

At Seoul Pig in Pearland, bulgogi, or thin grilled slices of marinated rib-eye, is the most popular dish, owner Danny Kim said.

Korean barbecue focuses on grilling the meat, rather than cooking it “low and slow,” Kim said. The food is grilled in the middle of the table at Seoul Pig, as meals are served family- style in Korean culture, Kim said. The meat is served with side dishes, which change daily. It is also typically served with a drink like soju, or flavored Korean vodka.

“You can’t have Korean barbecue without soju,” Kim said.

All of the recipes at Seoul Pig are his mother’s. According to Kim, Korean food has the boldest flavor, when compared to Chinese, Japanese and Vietnamese food.

Opening Seoul Pig, 2510 Smith Ranch Road, a year ago was a dream Kim worked toward for over 20 years. After graduating from the University of Houston, Kim worked at restaurants in Houston, starting as a busboy and working his way up to part owner.

“To me, it’s all about the passion. The No. 1 goal is the guest. It’s not about how much money I’ve made. To tell you the truth, I could have one table in here, but if that one table is 100 percent satisfied, that makes it all worthwhile. It really does,” Kim said.

Kim said he hopes to expand and is developing a concept for a second restaurant in Pearland.