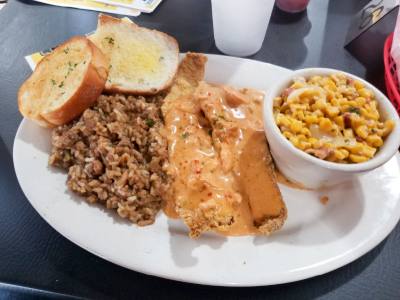 The Big Easy ($16.99) The dish features fried catfish topped with shrimp etouffee with dirty rice and corn serving as the side dishes.

Reggie Wilson brought the lessons he learned from his surroundings in Shreveport, Louisiana, to his menu at Cafe Rian—a Cajun restaurant near Atascocita.

“I’ve always had a passion for cooking,” Wilson said. “My mom was a sous-chef, and I’m a self-taught chef ... I’ve got Louisiana roots and this is what I grew up on. I’ve always cooked. I’ve always had more of a vision of how I want things and a vision for taste and what works.”

The eatery opened a second location at the intersection of Will Clayton Parkway and Atascocita Road in May, which is nearly four years after it originally opened on FM 1960 near Aldine.

While the new spot has a smaller dining space, the food and service is the same, said Wilson, who serves as executive chef in addition to owner.

Cafe Rian’s menu includes popular Cajun dishes, such as the Loaded Gumbo with crab, shrimp, and andouille sausage in addition to shrimp and grits, crawfish etouffee, and Creole shrimp and sausage pasta. It also offers soul food options on Sundays.

The restaurant makes everything from scratch, including the Iberia Boudin Balls, Wilson said. The drink menu features Cajun Hurricanes and daiquiris to go, a Louisiana specialty.

“We tag it this way—there’s nothing out of a bag or a box,” Wilson said. “We make everything from scratch, including the rue. We cook fresh chicken. We buy fresh sausage ... and crab meat.”

The restaurant also has a catering wing, which equals about 20 percent of the eatery’s takeout business, Wilson said. Instead of opening for lunch during weekdays, Cafe Rian is closed to the public while the employees focus on monetizing the catering aspect of the restaurant.

Cafe Rian caters to parties of all sizes, creating a customizable menu for each customer, Wilson said.

“We work with our customers and build a menu,” Wilson said. “What we do a lot of is our Cajun pastas because they go well for lunch, dinner and parties.”

Construction on the project, which was initially slated to begin in the third quarter of 2020, was previously delayed due to utility conflicts.