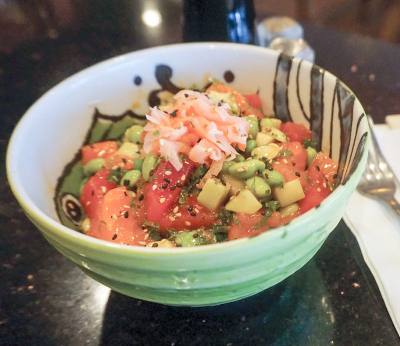 Diners who have a hankering for both Chinese and Japanese cuisines can please each palate at Ginger Cafe, a family-owned restaurant and sushi bar.

While owner Justin Liang carves up sushi rolls, his father Fu Liang whips up American-style Chinese dishes. His wife prepares salads and the restaurant’s homemade ginger salad dressing while his sister helps around the restaurant.

“We moved to Austin from Guangzhou, China, and opened a Chinese buffet restaurant there 15 years ago,” Justin said. “When we moved to the Humble area, we wanted to start a Chinese and Japanese restaurant.”

Ginger Cafe was a small restaurant 12 years ago at its opening, but its regular customers asked Justin when he would expand the space. In November 2015, he doubled the restaurant’s size to accommodate its growing base.

However, he has noticed customers have been eating more fish—to his delight.

“I think more people who are going out to eat are looking for healthy food,” Justin said. “Fresh seafood is healthy, and we use high-quality, fresh seafood at Ginger Cafe.”

To complement the meal, Ginger Cafe offers Japanese, Chinese and American beer, hot and cold sake of different flavors and Japanese soda. What makes Ginger Cafe unique, Justin said, is its reasonable prices, its variety of choices in bento box combinations, its speed of service and its fresh, quality seafood.

Ginger Cafe is also connected to the community. The restaurant donated 300 boxed lunches to volunteers cleaning up the streets or houses in the Lake Houston area after Hurricane Harvey.