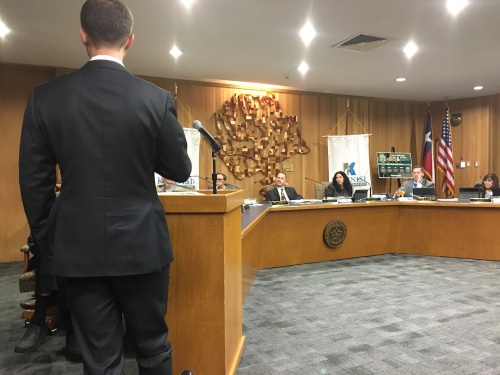 After years of accelerated growth, student enrollment in Klein ISD is expected to continue in the next few years but at a slightly slower rate, according to surveying company Population and Survey Analysts. KISD hired PASA in the spring to conduct a demographic analysis of the district for long-term school location planning.

KISD ranked as the eighth fastest growing district—in terms of numeric gains—in Texas from 2016-17 to 2017-18, enrolling an additional 1,258 students. But as the district ages and students graduate, less students are filling in, and the projected enrollment growth rate is expected to somewhat taper in the next five years, according to PASA.

“You’re one of the highest growth districts. That will be changing, because you’re maturing,” said PASA demographer Justin Silhavy at the KISD board of trustees meeting Oct. 8. “That bulge in the population [of new elementary students] has gone through, and we’re not really filling seats with new elementary students like we used to.”

Much of the school district’s growth in the past four years can be attributed to a burgeoning job market, with companies like ExxonMobil moving into the area and drawing in new residents, Silhavy said. However, new development means less space to build residential areas.

“You’re losing raw land. There just isn’t as many places to put new homes,” he said.

In fact, only 14 percent of land in KISD is undeveloped, and most of it is fragmented—meaning building large housing communities is a no-go, Silhavy said. However, he said he is eyeballing tracts along Grand Parkway and the northwest area of the district as potential hotspots for new upcoming developments.

KISD’s demographic characteristics are mostly in line with the Houston metro’s, Silhavy said, such as mean travel time to work—31.4 minutes compared to Houston’s 29.9—and percent of population between the ages of 5 and 17—both at 19 percent.

However, KISD’s median resident age is 35.6 years, while Houston metro’s is 34.4 years, and the district has been steadily aging.

“You’re becoming an older district,” he said. “[The median age has] gone up over 1.5 years. It was about 34 years just five years ago.”

An aging population roughly translates to general satisfaction with the community, Silhavy said.

“That kind of tells us people aren’t leaving Klein,” he said. “You’re a little older, and people like Klein. That’s usually what I tell people when I see the median age increasing. In this community, I see that as the case as well.”

One factor that might draw students away from KISD and public school districts in general is the growth of charter schools.

The lower enrollment in charter schools mostly has to do with the lack of such campuses in the area, but the district could still experience increased competition in the future as charter schools are changing their marketing tactics, Silhavy said.

“They used to be … located in urban districts. Now they’re expanding and changing their programming, and you see them popping up in districts like Katy and Cy-Fair,” he said.

An anticipated uptick in the number of jobs in and near the area is expected to fuel ongoing growth in student enrollment at KISD, Silhavy said.

“Oil is up, and the energy companies are starting to slowly hire again,” he said. “In this local area, we know Springwoods Village is kind of the focal point of job growth right now.”

Several corporate headquarters were relocated or are planned to relocate to Springwoods Village, including the American Bureau of Shipping, HP Inc. and XTO Energy, an ExxonMobil subsidiary, he said.

“Everyone is starting to consolidate their fragmented corporate Houston warehouses and distribution centers into big mega-complexes,” he said. “This area is a hot spot for that. It’s near the airport, there’s a lot of great freeway access to the north and other places.”

The other big factor in student population is housing availability, he said.

Since 2016, the housing inventory in KISD was dropping, possibly because more people were buying homes than anticipated, Silhavy said. This year, supply outpaced demand, and in June 2018, there was an 8.5-month supply of new homes, which is well above a balanced market, he said.

More developments are slated in the district, “but it’s now not needed,” he said.

The largest single-family growth neighborhood in the district is Laurel Park, with 446 homes opening from 2018-2023. Others include the Retreat at Champions Landing at 330 homes and Klein Orchard with 310 homes, he said. In the longer term, Springwoods Village is anticipated to build 600 homes from 2023-2028; however, no infrastructure for that additional development is in place yet.

“Laurel Park is building up fairly rapidly, but there weren’t as many students in Laurel Park as we were projecting. A couple of neighborhoods just didn’t gain the students, even though there were more homes,” Silhavy said.

On the multifamily side, the first wave of projects is nearing completion, with 13 new apartment complexes opening in Klein in the past several years. Three complexes recently broke ground, and many others are planned in the near future, mostly in the Grand Parkway corridor, he said.

“A new wave of projects is about to come,” he said. “We’re only going to have about 190 new units in the next 12 months, which is low compared to the last couple of years, but we’re going to see an uptick of that as some of these new properties build and come online in 2019 and 2020.”

PASA predicts 18,360 units to be occupied in the next 10 years, and most students will come from older apartment complexes.

“Newer multi-family properties generally have fewer students,” Silhavy said. “In the last year, the growth you did have occurred in two places: 56 percent occurred in active subdivisions, but 34 percent occurred in apartments. That’s very abnormal, but it’s because you had so many apartments built at the same time. So, you won’t see that this year.”