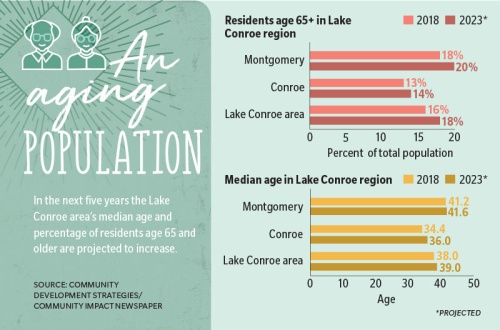 The first baby boomers, the generation of Americans born after World War II, reached age 65 in 2011 and will continue to reach retirement age until 2030, according to the Pew Research Center. As this generation retires, developers are building new lifestyle communities around Lake Conroe to cater to the aging population.

According to a 2018 report from economic research firm Community Development Strategies, the median age in the Lake Conroe area is anticipated to increase in the next five years—from 37.98 in 2018 to 38.9 in 2023. Moreover, 16 percent of the Lake Conroe population is currently 65 years old and older, compared to the anticipated 18 percent in 2023.

This portion of the residential population has created a demand for varying types of lifestyles and luxury living options, including 55-and-older active adult communities and assisted- and/or independent-living communities, said Nancy Mikeska, community development director for the city of Conroe.

Mikeska said the area has seen more of an increase in assisted- and/or independent-living facilities developing within the city limits, as most active adult communities are developing in Conroe’s extraterritorial jurisdiction.

“[Some] baby boomers want to get somewhere early on and then live out their days there without having to worry about where they will be [living],” Mikeska said.

In recent years, active adult communities have developed along Lake Conroe, creating a new option in the senior housing market. Active-adult communities are similar to other single-family home subdivisions, but they provide a social space for the empty nesters, retirees or soon-to-be retirees who want to downsize their homes without sacrificing quality of life, Mikeska said.

“People talk about the starter homes [for younger families], but what we see is they are also being used as empty nester-type homes,” she said. “They’re smaller in size and maybe square footage but not lesser in amenities.”

Woodfalls Development Co. President Adrian Jordan said active-adult communities are for baby boomers who are not at the point in their lives where they need assisted living, but they want to be in a close-knit community.

“We’re taking away that assisted-living concept and developing something where you can still be in a retirement community and also be very active,” Jordan said.

Active-adult communities are also attractive to baby boomers who want to be closer to family, experts said. Shannan Reid, director of the Montgomery Economic Development Council, said she believes baby boomers are flocking to the Montgomery area to be near their children and school-age grandchildren.

Living closer to family members has been key to the senior living development in the Woodforest community,  Director of Marketing Faith Pitman said. In August 2014, Woodforest—a master-planned community located south of Conroe—partnered with Taylor Morrison developers to debut Bonterra at Woodforest, Pitman said.

“We have a lot of multigenerational families [in Woodforest], so the grandparents ... can still go to all their grandkids’ or kids’ activities,” Pitman said. “It also gives them that option to be with their [age] 55-plus friends … and it’s great for your livelihood and your quality of life to have family close.”

Assisted- and independent-living communities provide an alternative lifestyle to active-adult communities in that they can offer resort-like amenities and nursing care to residents.

“I think about 10,000 baby boomers every day are turning 65 and that’s been happening for a few years now,” he said. “The need [to move into senior housing] is probably going to arise, so they might want to think about being proactive instead of reactive.”

“As beautiful as these [lakeside] communities are, the homes require a lot of lawn and general upkeep,” Dodd said. “[At Woodhaven Village], they have the ability to have a flexible but carefree lifestyle. Obviously, as people get older, there are going to be more and more people who need that.”
SHARE THIS STORY