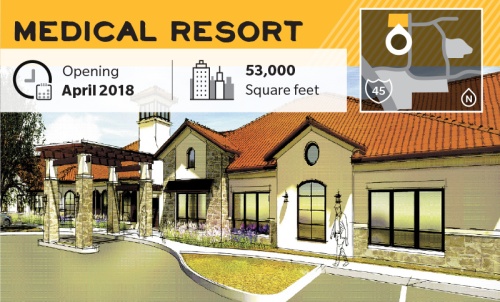 Construction on Cathedral Lakes, a 150-acre mixed-use development located at the northeast corner of I-45 and Spring Creek, is underway and slated for completion by 2022, Grace Woodlands Church officials said.

Grace Woodlands owns the majority of the developable land and is selling portions of the land to individual developers. Upon completion, the development will include single- and multifamily housing options, commercial development—including retail and restaurants—and a lake with waterways, all surrounding the church, officials said.

Revenue from land sales will also help pay for the church’s planned renovations, which includes expanding the church auditorium to more than 4,000 seats and constructing a building which will resemble a cathedral, that will serve as both a church facility and a community landmark, Senior Pastor Steve Riggle said.

Grace Woodlands was constructed on the property in 2007, while construction on Cathedral Lakes began in 2012. The church has since sold approximately 25 percent of the land to tenants, including Northside Lexus, which will open in December 2018, Hotel Indigo, slated to open in Spring 2019, and a medical resort, that is slated for completion in April 2018. Several others tenants are in contract negotiations, officials said.

The church had initially planned to sell the land for industrial purposes; however, after ExxonMobil and Springwoods Village opened nearby on the west side of I-45 in Spring, the development plans were re-evaluated, Riggle said.

Roughly 35-40 percent of the development will be reserved for residential use, two-thirds of which will be waterfront property. Riggle said residential options and commercial tenants will all be high-end.

Cathedral Lakes has not yet pursued any home developers, however plans to do so in the near future, Riggle said.

“We have certain criteria. So we have prohibited uses here, and we control all of the architecture—similar to The Woodlands but obviously on a much smaller scale,” Riggle said.

The remaining third of the waterfront property will likely be reserved for restaurant use, similar to the design of Hughes Landing, Riggle said.

“We’ve been pretty picky [when selling],” he said. “We could have sold all of the land 10 times by now but we didn’t because 15-20 years from now, we want the development to still be high-end.”

The development will also feature ample angled street parking and walking trails throughout. The main road through the development has already been constructed, which connects the I-45 frontage road to Rayford Road.

“The only flooding we experienced [from Hurricane Harvey] was on parts of the site that hadn’t been done yet because we will have a few months of fill work to do, so they haven’t been built up to our standards,” Riggle said.

Riggle said that with most of the site’s groundwork set for completion in the next six to eight months, he hopes the development will be substantially completed within the next five years.

“The advantage here is that you can be on I-45 or the Grand Parkway in 90 seconds, and you’re just minutes from Exxon, Springwoods Village [and] The Woodlands,” he said. “We want this to be a destination to shop and eat. Maybe we’ll end up with something like Hughes
Landing, only bigger.”
SHARE THIS STORY