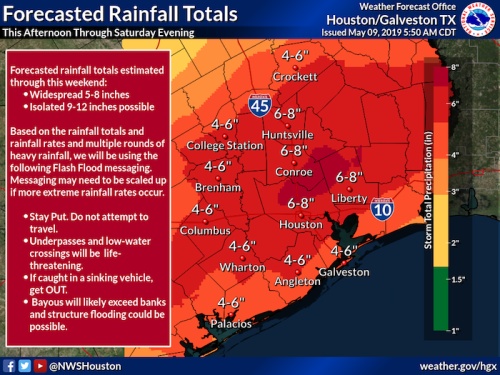 The National Weather Service is calling for a flash flood watch to go into effect starting at 1 p.m. May 9 through 7 p.m. May 11.

This story was updated at 2:45 p.m. May 9 with information on Red Cross shelters.

The National Weather Service announced a flash flood watch for all of southeast Texas that will go into effect at 1 p.m. Thursday, May 9, and will remain in effect through 7 p.m. Saturday, May 11.

The first round of storms is expected to run from late afternoon on Thursday through Friday morning. A second round of storms could occur late Friday and run through Saturday evening, according to the NWS.

"Soils remain saturated from previous rainfall over the past few days," NWS officials said in a May 9 release. "Any additional rainfall should run off quickly and cause flooding."

In urban areas like Houston, the NWS also issues "stay put" alerts when rain falls at a rate of 2-4 inches per hour or 4-8 inches per three hours. During a "stay put" alert, residents are advised not to attempt traveling and to expect flooding at underpasses and low-water crossings.

The Red Cross announced shelter availability at three emergency shelters that have been set up in Harris, Montgomery and Fort Bend counties. Individuals affected by the flood and access the shelters for meals, a dry place to sleep and emotional support.

Shelters have been set up at the following locations:

Stay tuned to Community Impact Newspaper for updates on weather, road closures and bayou levels in flood-prone areas throughout the weekend.