Efforts to expand access to mail ballots in Texas during the coronavirus have been blocked in several recent court rulings, including a May 27 ruling by the Texas Supreme Court.

However, in that same ruling, Supreme Court justices upheld a piece of voting law that essentially allows voters to decide for themselves whether they qualify for a mail ballot and said election officials are not obligated to verify those qualifications.

In the May 27 ruling, the Supreme Court agreed with state officials, who argued that a lack of immunity to COVID-19—the disease caused by the coronavirus—did not qualify as a “disability” in and of itself under state law, and therefore was not enough to make a voter eligible for a mail ballot.

“We agree, of course, that a voter can take into consideration aspects of his health history that are physical conditions in deciding whether, under the circumstances, to apply to vote by mail because of disability,” the court wrote. “We disagree that lack of immunity, by itself, is one of them.”

Meanwhile, a separate but similar lawsuit is making its way through federal court, where an appeals court also ruled against expanding mail ballot access in early June.

In a May 27 statement, Texas Democratic Party Chair Gilbert Hinojosa condemned the Supreme Court’s ruling with regards to lack of immunity and looked to the federal courts to rectify the issue.

“Now it is up to the federal court to ensure basic constitutional rights still exist in Texas and ensure that Texans have the right to vote safely and not put their health at risk,” he said.

Those opposed to expanding voting by mail, including Attorney General Ken Paxton, said it is against state law and could lead to voter fraud.

In July, voters in the Republican and Democratic parties will select candidates in primary runoff elections, which determine who will represent each party during the election in November. Ballots in Cy-Fair include races for U.S. Senate and Harris County Precinct 3 for Democrat voters, and Harris County Sheriff for Republican voters.

Officials with the Harris County Clerk’s Office said they are preparing new protocols for voting in person that try to prevent virus spread. Following the resignation of County Clerk Diane Trautman, who resigned May 31 for health reasons, the county’s efforts are being led by interim County Clerk Christopher Hollins.

On June 15, Hollis announced a series of initiatives for July runoffs intended to bolster safety, security and efficiency in announcing results.

The debate is taking place at COVID-19 hospitalizations and new cases per day are both on the rise, prompting local leaders in Harris County to describe the rate of transmission as "significant" and "uncontrolled."

The first major court ruling over mail ballots came in April, when state district Judge Tim Sulak ruled any voter who lacks immunity to COVID-19 is eligible to vote by mail. The ruling was quickly appealed by Paxton.

Mail ballots are available to Texas voters for one of four reasons: The voter is age 65 or older, has a disability, is a resident of Harris County but will not be able to vote in the county during the election, or is in jail but eligible to vote. The debate has centered on whether a lack of immunity to COVID-19 qualifies as a “disability,” said Douglas Ray, a special assistant in the Harris County Attorney’s Office.

Paxton has warned county election officials that advising a voter to request a mail ballot for an unauthorized reason could come with criminal punishment. However, when voters request mail ballots on their own, the county has no means by which it can vet those requests, Ray said.

“It’s unreasonable to demand that we either warn people that they can’t do it on this basis or try to require some kind of further proof or do any investigation,” he said.

Rosio Torres-Segura, the administrator of communications and voter outreach with the Harris County Clerk’s Office, said the office is bound by law to process all requests for mail ballot applications if they are from registered voters and signed.

As of May 22, the Harris County Clerk’s Office had received 77,317 requests for mail ballots from county voters, Torres-Segura said, as compared to roughly 27,552 total mail ballots cast in 2016 primary runoffs.

That number is likely to be much higher for November general elections, which could bring new layers to the courtroom battles, said Renee Cross, senior director of the Hobby School of Public Affairs with the University of Houston.

“I don’t see this conflict going away regardless of whatever is resolved for July,” she said. “[There] could be a whole new slew of disagreements for the November election.”

Michael Moore, who in the Democratic primary for Harris County Precinct 3 commissioner, is a proponent of expanding mail ballots, arguing it would increase voter participation while alleviating some of the health concerns about voting in person posed by the coronavirus pandemic.

Moore’s opponent in the primary, Diana Martinez Alexander, said she also supports expanding vote by mail, but due to the court rulings, she said she is being careful in how she speaks about voting to constituents.

“I think it places candidates in a very precarious position because we don’t want to say anything that’s going to cause us any liability,” she said. “We do want people to be careful and make good decisions for themselves.”

Critics of mail ballot expansion include Wendell Champion, a candidate in the Republican runoff election for Texas Congressional District 18, which covers parts of northwest Houston. He echoed Paxton’s concerns about voter fraud.

“In-person ballot voting is the securest way to make sure that the individual’s vote is counted and that it is counted at the time it should be counted,” he said.

However, in a May 19 ruling that would eventually be overturned, federal district Judge Fred Biery rejected the idea that mail ballots would lead to voter fraud.

For those pushing for expanded mail ballot access, the debate centers on the coronavirus and its potential to spread at a greater rate if people are required to show up to polling locations in person to vote.

In making the case to Sulak in April, lawyers called on public health officials to testify, including Catherine Troisi, an infectious disease epidemiologist at The University of Texas Health Science Center in Houston. Troisi said polls could easily become a hotspot if long lines build up and people do not social distance.

In late April, Harris County approved investing up to $12 million to fund new safety measures and increase the ability to process mail ballots. Efforts include increasing the number of early voting locations, finding larger locations and sending mail ballots to all individuals over the age of 65. Texas Gov. Greg Abbott also moved the start of the early voting period from July 6 to June 29. 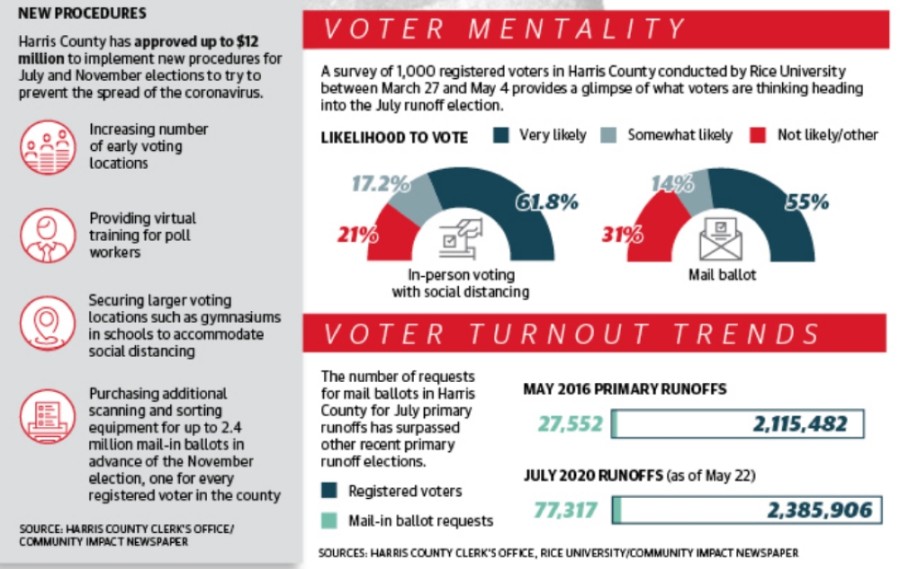 In a survey of 1,000 registered voters in Harris County conducted between March 27 and May 4 by Rice University, about 61.8% of voters said they would be “very likely” to vote in person if social distancing measures were enforced at the polling location. Another 17.2% of voters said they would be “somewhat likely” to do so. However, voters over 65, female voters and Democratic voters showed preferences for mail voting.

Another possible problem involves poll workers and whether the county will be able to recruit enough of them to run all of its polling locations smoothly, said Marlene Lobberecht, president of the Cy-Fair chapter of the League of Women Voters. The LWV in Texas hosted a virtual webinar May 29 with the goal of recruiting poll workers across the state, Lobberecht said.

"The COVID-19 pandemic in 2020 created a major election staffing challenge for election officials throughout the nation," Lobberecht said in an email. "The League of Women Voters of Texas recognizes this emergency. We are providing a platform to energize the collective power of nonprofit organizations statewide to assist with election worker recruitment."

The Rice University survey also sought opinions from 1,800 Harris County poll workers on how they felt about working polling places during the pandemic.

Cross said if July elections can be tied to new outbreaks of the coronavirus, that will add pressure to resolve the issue before November. Roughly 85% of poll workers said they were either very likely or somewhat likely to work at a polling place as long as social distancing requirements were implemented and protective actions were taken, such as installing plexiglass screens and providing workers with sanitzed gloves and other personal protective equipment.

However, in an interview prior to the Texas Supreme Court ruling, Tommy Buser-Clancy, a senior staff attorney with the American Civil Liberties Union of Texas, said safe in-person voting opportunities are crucial, but he believes they are not enough on their own.

"The notion that the ameliorative effects of the steps that they’re taking are sufficient and displace the need to vote by mail, I think, is wrong," he said. "It is good and necessary for steps to make in-person voting as safe as possible, but it needs to be paired with vote-by-mail. Otherwise, I think you’re going to see a lot of people staying home, not exercising the right to vote, and you create a dangerous situation for those who do go to vote."

Cross said if July elections can be tied to new outbreaks of the coronavirus, that will add pressure leading up to November.

“This is a very important election, and I have a feeling that people would want to make their voice heard,” she said. “I think between seeing its successful implementation in other states [and] if the virus continues, those that may oppose mail voting right now will be more open to it by November.”